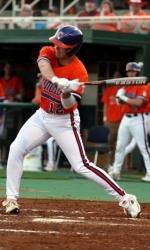 Boston College scored a combined five runs in the last two innings to defeat #24 Clemson 7-6 in the second game of a three-game series in front of 3,995 fans at Doug Kingsmore Stadium on Saturday. The Eagles, who took a 2-0 series lead, improved to 8-7 overall and 2-3 in the ACC, while the Tigers fell to 9-6 overall and 1-4 in ACC play.

Tiger reliever Casey Harman (0-1) faced just one batter in the eighth inning and allowed one unearned run to take the loss. Starter D.J. Mitchell, who did not factor into the decision, pitched a career-long 7.1 innings and allowed three runs on seven hits while striking out a career-tying six and walking two.

The Tigers scored two runs in the first to take a quick lead. With two outs, Doug Hogan was hit by a pitch and stole second. Ben Paulsen then drove Hogan home with a double to right-center. Jeff Schaus followed with a double through the left side to plate Paulsen.

The Orange and Purple scored one more run in the second. Mike Freeman led off the frame with a single to center and a throwing error by catcher Tony Sanchez allowed him to move up to third. Two batters later, Boyd singled to left-center to score Freeman and put the Tigers up 3-0.

Boston College responded with two runs in the top of the fourth. Sanchez hit his third home run of the season, a one-out solo shot to left. Eric Campbell drew a walk and stole second. Michael Belfiore then hit a two-out single up the middle to plate Campbell.

Boston College added three insurance runs in the ninth to increase its advantage to 7-3. Barry Butera and Matt Hamlet led off with back-to-back singles through the left side. Butera then scored on ball hit by Campbell that was dropped by Boyd. The error put Hamlet and Campbell in scoring position. With two outs, Belfiore doubled to right-center, scoring both Hamlet and Campbell.

The Tigers rallied with three runs in the bottom of the inning, but they fell just short. Pinch-hitter J.D. Burgess led off the frame with a walk. Freeman then reached first on a fielder’s choice that was mishandled by Smith to allow Burgess to reach second on the error. Stan Widmann then hit another fielder’s choice to shortstop for out #2 to put runners on corners. Boyd then tripled down the right-field line to plate Burgess and Widmann. Hogan followed with a single through the left side to score Boyd. But Paulsen struck out with the tying run on first base to end the game.

Boston College, who totaled 12 hits, was led by Belfiore, who went 3-for-5 with four RBIs.

Schaus had three of the nine hits for Clemson and one RBI. Boyd added two hits and three RBIs as well.

Clemson and Boston College will play the series-finale on Sunday at 1:00 PM.