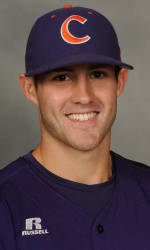 Freshman righthander Chase Bebout allowed just two runs in a career-high 7.1 innings pitched to lead Duke to a 7-2 win over #11 Clemson in front of 819 fans at Durham Bulls Athletic Park on Sunday afternoon. The Blue Devils, who won the series 2-1, improved to 19-13 overall and 5-10 in the ACC. The Tigers dropped to 23-10 overall and 10-5 in ACC play.

The Blue Devils took the lead with two runs in the first inning and never gave it up. Meanwhile, the Tigers were unable to solve Bebout in clutch situations, especially with two outs, as they were 0-for-7 in that situation while Duke was 5-for-11. Clemson totaled nine hits and five walks, but only scored two runs thanks in part to three double plays by the Blue Devil defense. Duke scored seven of its 14 baserunners in the game and only left four runners on base.

Bebout (4-0) earned the win, as he allowed six hits and five walks with five strikeouts in throwing 114 pitches over 7.1 innings pitched. Ben Grisz pitched the final 1.2 innings without allowing a run to close out the game.

Will Lamb (3-2), the first of four Clemson pitchers, suffered the loss, as he yielded four runs on four hits in 3.0 innings pitched.

The Blue Devils took the game’s first lead in the first inning when Will Currier belted a two-run homer to left field, his seventh home run of the season. It was also the fourth game in a row that he homered. Ryan McCurdy, who led off with a walk, also scored.

The Tigers dented the scoreboard in the top of the third inning. Addison Johnson led off with a walk on nine pitches and advanced to third on Chris Epps’ single through the right side. Mike Freeman followed with a single to center to score Johnson. But the next two Tigers were retired and Epps was picked off at second base to keep the Blue Devils ahead 2-1.

The Blue Devils scored a run in the bottom of the third inning. With two outs and no one on base, Currier was hit-by-pitch on a 1-2 count and scored on Jeremy Gould’s double high off the wall in left field.

In the top of the fourth inning, John Hinson reached on a one-out single to first base to extend his hitting streak to 13 games. But Wilson Boyd grounded into a double play and John Nester flied out two batters later to end the frame.

Dennis O’Grady led off the bottom of the fourth inning with a solo homer to left, his first long ball of the season.

For the fifth time in the first six innings, the Tigers put their leadoff batter on base in the top of the sixth. Kyle Parker led off with a single off the wall in left. But Hinson flied out and Boyd lined into an inning-ending double play.

Duke used the opposite approach to add to its lead in the bottom of the sixth inning. After the first two Blue Devils were retired, Brian Litwin singled up the middle, stole second, and moved to third on Marcus Stroman’s infield single. After Stroman stole second, Eric Brady grounded a single off Hinson’s glove at third to score Litwin and Stroman.

In the top of the eighth inning, the Tigers cut into the Blue Devil lead. Freeman hit a one-out double to left-center and scored on Jeff Schaus’ single through the right side.

But the relentless Blue Devils came right back and scored a run in the bottom of the eighth inning. Gould led off with a hit-by-pitch and moved to second on Will Piwnica-Worms’ single up the middle on a 1-2 pitch. After O’Grady’s sacrifice bunt moved the runners up a base, Litwin’s grounder to third plated Gould.

Jake Lemmerman and Piwnica-Worms had two hits apiece to lead Duke, who had 10 hits in the game. Freeman had a team-high two hits for Clemson, who had nine hits.

Hinson capped off an outstanding week by going 1-for-4 at the plate on Sunday. In five games this past week, he went 13-for-24 (.542) with two homers, three doubles, 12 RBIs, one walk, two steals, and no errors in 15 chances in the field.

Clemson will host Western Carolina on Wednesday at 6:30 PM.