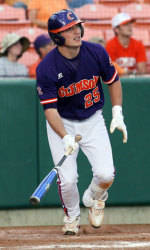 Duke scored six runs in the sixth inning to break open a close game in its 10-4 victory over #13 Clemson in front of 2,763 fans at Durham Bulls Athletic Park in the ACC Tournament on Friday. The Blue Devils kept their ACC Tourney title hopes alive and improved to 35-23 on the season. The Tigers were mathematically eliminated from winning the ACC Tournament title with the loss and dropped to 39-19.

The 3-4-5 hitters in the Duke lineup provided most of the team’s offense. Nate Freiman, Jeremy Gould, and Jake Lemmerman combined to go 8-for-12 with two doubles, one triple, two homers, four RBIs, and six runs. Freiman went 3-for-4 with a double, homer, RBI, and two runs, while Lemmerman went 3-for-4 with a double, triple, homer, three RBIs, and two runs. Alex Hassan added three RBIs for the Blue Devils, who totaled 11 hits in the game.

For the 13th game in a row, Clemson took the game’s first lead when Kyle Parker led off the top of the second inning with a home run to left field, his 12th long ball of the season.

The Blue Devils tied the score when Lemmerman led off the bottom of the second inning with a homer down the left-field line, his seventh home run of the year.

Tiger miscues helped Duke take the lead in the third inning. Ryan McCurdy led off by reaching on a fielding error by shortstop Brad Miller. McCurdy then was running on a hit-and-run, but no Tiger came to the second-base bag in time to receive the throw from catcher John Nester, which was in plenty of time to retire the runner, after the batter swung and missed the pitch. McCurdy was safe at second and advanced to third when the throw went into centerfield. Hassan then lined a sacrifice fly to center to score McCurdy.

Duke added to its lead with six runs in the sixth inning. Freiman led off with a solo home run to left-center, his 20th long ball of the season. Gould followed with a bunt single to extend his hitting streak to 21 games and scored on Lemmerman’s triple to right-center. Lemmerman then scored on a wild pitch. Will Piwnica-Worms followed with a walk and Gabriel Saade did the same two batters later. McCurdy then laced a double to left field to score Piwnica-Worms and Hassan bounced a single up the middle past a drawn-in infield to score Saade and McCurdy, giving Duke an 8-1 lead.

In the eighth inning, Mike Freeman lined a one-out single to left-center and was safe at second on Saade’s fielding error at second on a groundball by Schaus. Ben Paulsen ripped a single to left to score Freeman. After Parker walked to load the bases, Boyd battled back from an 0-2 count to draw a walk to bring home Schaus. Two batters later, Miller reached on a two-out fielding error by McCurdy at third that allowed Paulsen to score. But Duke escaped further damage when Matt Sanders grounded out to end the frame.

Like Duke, the Tigers totaled 11 hits, but Clemson could not piece together enough hits in a row. Freeman, Paulsen, and Boyd had two hits apiece for the Tigers, who were just 1-for-12 with runners in scoring position, only scored four of their 16 baserunners, and left 10 runners on base. Duke stranded just four on base and went 4-for-7 with runners in scoring position.

Clemson will play #2-seed North Carolina on Saturday at 4:00 PM. The Tigers will be the designated home team and occupy the third-base dugout.