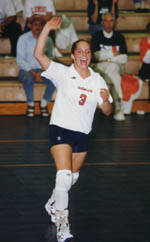 Clemson travels to Wake Forest on Saturday for a 7:00 pm match with the Demon Deacons.