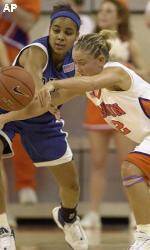 Clemson, SC-Alana Beard scored 26 points and moved into second place on the all-time ACC scoring list, leading second-ranked Duke to a 78-60 women’s basketball victory at Clemson Monday evening. The victory was Duke’s 51st in a row over an ACC opponent for the Blue Devils, a streak that dates to Beard’s freshman year in a game against NC State. Duke is now 17-2 overall on the 2003-04 season and 8-0 in the ACC. Clemson fell to 15-5 overall, 5-3 in the ACC.

Clemson returns to action Thursday night when it plays host to a top 20 North Carolina team.

Duke is now 53-3 against ACC teams in Beard’s four years. One of the three losses came at Littlejohn Coliseum during the 2000-01 season, a 93-75 Clemson win, the worst loss of Beard’s career against an ACC team and the second largest margin of defeat in any game for Duke over the last four years. Clemson seniors Lakeia Stokes, Maggie Slosser and Julie Aderhold all had played in that victory over Duke as freshmen.

Beard scored her 26 points on Monday on 10-15 shooting, added 2-3 three-point shots, 4-4 from the line, collected five rebounds and blocked four shots in just 30 minutes of efficient play. It was Beard’s third game this year with at least 25 points, her first against an ACC team. She now has 2385 career points, second on the league list behind only former Clemson All-American Barbara Kennedy, who was in attendance at the game providing color commentary on Clemson’s radio network.

Kennedy scored 3113 points between 1978-82, still he ACC record 24 years after she graduated by 728 points. If Duke reaches the ACC championship game and the NCAA championship game, Beard would have to average 42.8 points per game over the remainder of the season to catch Kennedy, who is also the ACC’s career rebound leader. Beard’s single game career high is 41 points.

Clemson was led in scoring by Lakeia Stokes, who reached her season average with 18 points. Stokes hit 7-14 shots from the field, had four assists and four steals in 30 minutes of play. Khaili Sanders added 15 points off the bench, her season high and just two points off the sophomore’s career high.

While Beard was dominant, she had support from Monique Currie, who had 13 points and seven rebounds, and Brittany Hunter, who had 11 points off the bench in just 19 minutes. All-America candidate Iciss Tillis started, but scored just two points. She left the game with an injury in the first half and did not return. She played just 14 minutes.

Clemson also had three players miss time due to injury. Point guard Julie Aderhold left the game in the second half with an ankle injury. All three Lady Tigers returned to the game after their injuries.

Clemson got off to a poor start offensively in each half. In fact, Clemson made exactly 2-11 from the field at the opening of each half. Duke took a 9-2 lead to open the game and expanded the margin to 13 points at 27-14 with 5:55 left on a bucket by Lindsey Harding, who had seven assists and just one turnover for the night.

Clemson scored two buckets early in the second half as Stokes had a layup and senior Julie Aderhold connected from long range to make the score 39-33 with 17:46 left. But, Duke went on a 15-0 run over the next 6:35 to take a 54-33 lead with 12:02 left. Currie had six and Beard four in that 15-0 run that put the game away for the Blue Devils. Clemson cut the margin to 16 a couple of times down the stretch, but could get no closer.