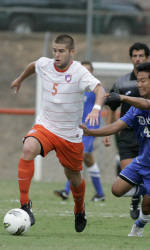 CLEMSON, SC – Andrew Wenger scored three goals and assisted on another in leading Duke to a 5-2 victory over Clemson in an Atlantic Coast Conference men’s soccer match at Clemson, SC Friday night.

Clemson was led by Austin Savage with two goals and Iain Smith who also had two assists.

Duke scored early in the match in the ninth minute. Joseph Pak sent the ball to Wenger at the top of the box. Wenger turned to his right and sent a shot into the netting to give the Blue Devils a 1-0 lead. Clemson tied the score in the 13th minute Bryniar Benediktsson played the ball from the middle to Iain Smith. Smith crossed the ball from the right to Savage who sent an eight-yard shot into the goal to knot the score at 1-1.

Duke took a 2-1 lead at the 36-minute mark. Lewis McLeod scored off of a six-yard goal shot with an assist from Wenger. In the 58th minute, Duke went up 3-1, when Nick Palodichuk scored on a free kick just outside the 18 yard box. Palodichuk fired a shot that curved pass the wall and into the netting.

The Blue Devils struck again in the 63rd minute as Wenger scored his second goal of the night with an assist by Palodichuk.

Savage scored his second goal of the evening for Clemson in the 74th minute. Bo Godwin sent a pass to Smith who crossed the ball to Savage. Savage scored from 12 yards out to narrow Duke’s lead to 4-2.

However, Wenger would score his third goal of the evening with an assist by Palodichuk in the 80th minute to give the Blue Devils a 5-2 advantage. Wenger now has seven goals this season.

“I give Duke a lot of credit, Andrew Wenger and his team put on a show,” said Clemson Head Coach Mike Noonan. “If you give him space and looks, he will score goals. We played tentative tonight – we looked as if we were scared to play. These things happen, and I take the blame. We did some things right in the midfield and in the attacking third, but defensively we were very poor. It didn’t help things when Nick Burton got hurt tonight, and we learned the other day that our senior defender Francklin Blaise is out for the year with a hip injury.

“We can take a lot from this game. Tonight they were the better team and they took advantage of our disorganization in the back. We must now improve from this match. We will watch the film and get back to work as we must now prepare for an excellent Charlotte team coming to Clemson on Tuesday.”

Clemson will play host to Charlotte on Tuesday, September 20, at Historic Riggs Field in the Tigers’ next action. Match time is set for 7:00 p.m.