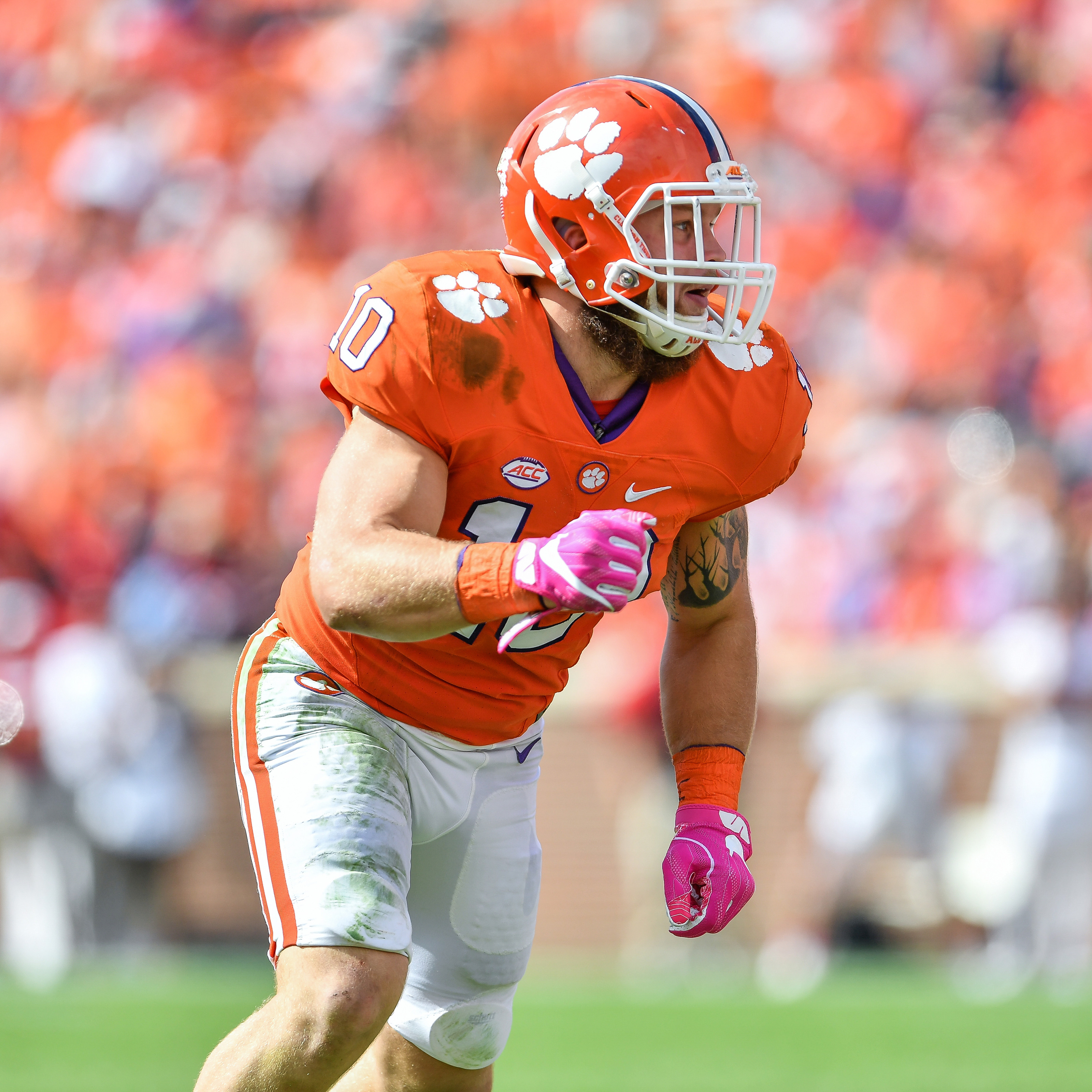 Ben Boulware was, without a doubt, the heart and soul of Clemson’s defense this past season, epitomized as much by the senior linebacker’s passionate postgame speech following the Tigers’ victory in the national title game. A field general in every sense of the term, Boulware served as the vocal leader of the defense during his two seasons in the starting lineup. Now ready to take that heart and passion to the next level, Boulware is flying under the radar as an NFL Draft prospect.Early draft projections list Boulware as a late-round prospect, mostly because of the fact that he is undersized for the NFL linebacker prototype. However, what Boulware lacks in stature, he makes up for in tenacity. He was the leading tackler for the Tigers this past season, collecting 131 total, while earning several prestigious honors at season’s end for his stellar play. Named as a First-Team All-ACC linebacker and the ACC Co-Defensive Player of the Year by the league’s coaches, Boulware was also the recipient of the prestigious Jack Lambert Award, presented annually to the best linebacker in the country by the Touchdown Club of Columbus (Ohio).Like Hall of Famer Jack Lambert, the namesake of the top honor, Boulware is a fireball on defense, covering ground in a hurry and involving himself on nearly every play. With four sacks, two pass breakups and an interception in 2016, Boulware made his mark across the board, showcasing his trademark nose for the ball that should have NFL teams very intrigued.A prep superstar at T.L. Hanna High School in nearby Anderson, Boulware did not garner the same level of attention or success early on in his Clemson career as he did throughout his high school career. But by way of his trademark fortitude and perseverance, he was able to steadily ascend the depth chart, eventually becoming a permanent captain and All-American on the 2016 defense.Boulware led by example during his time with the Tigers, displaying a high level of commitment to the program on and off of the field. With experience at the middle linebacker and outside linebacker spots while at Clemson, the 6-0, 235-pounder displayed his acumen in the run-stopping department particularly over his two years as a starter for the Tigers.Perhaps his most important football-related attributes are love and commitment for his team and the sport of football. Speaking of his recent senior leader, defensive coordinator Brent Venables was quoted as saying, “Not a better leader, not a better tough guy, and there’s not anybody that cares more and has worked harder than Ben.”Resembling former All-Pro NFL linebacker Zach Thomas, both through his stature and playing style, Ben Boulware has put himself in position to be a potential steal in the upcoming draft class. He is a charismatic, vocal leader in the locker room and a ferocious tackler with a high football IQ on the gridiron.A throwback in the sense that winning is his ultimate goal, no matter the circumstance, his style of play mirrors the gritty linebackers of yesteryear. He was critically acclaimed for being as bold and brash as any player in the country while an upperclassman at Clemson, making it only too appropriate that he is now poised to make some serious noise, literally and figuratively, at the next level.