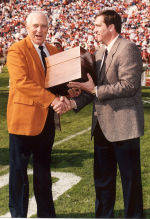 Wade was inducted into the Clemson Athletic Hall of Fame in 1992 after serving Clemson as a starter on the Tiger football team from 1950-52, and as an assistant coach under Frank Howard from 1953-67.

A native of Tyronza, AR, Wade was a three-year starter at linebacker for Clemson. He was a big reason Clemson defeated 15th ranked Miami (FL) in the 1951 Orange Bowl, as he had two interceptions, including a theft on Miami’s final drive in the 15-14 Clemson win. He is still the only Clemson player in history to record two interceptions in a bowl game.

Wade went into coaching at Wayneboro (GA) High School in 1952. The following July, he was back at Clemson as the freshman football coach. He became the offensive line coach in 1959 and held that position until 1967.

During Wade’s coaching career the Tigers played in three bowl games, including the 1957 Orange Bowl and the 1959 Sugar Bowl. Wade was on the staff of six ACC Championship teams under Howard.

Wade is given credit for signing many of Clemson’s players from the Pennsylvania area during his time as an assistant coach.

In 1968, Wade accepted the head coaching position at Tennessee Tech University and he directed the Golden Eagle program for 15 years. He also served as Tennessee Tech’s Athletic Director from 1974-80.

Wade returned to Clemson in 1983 and served as an administrator in the Clemson football program under Danny Ford until 1988. Wade was a part of three more ACC Championships (1986-88) in his second tenure with the football program.