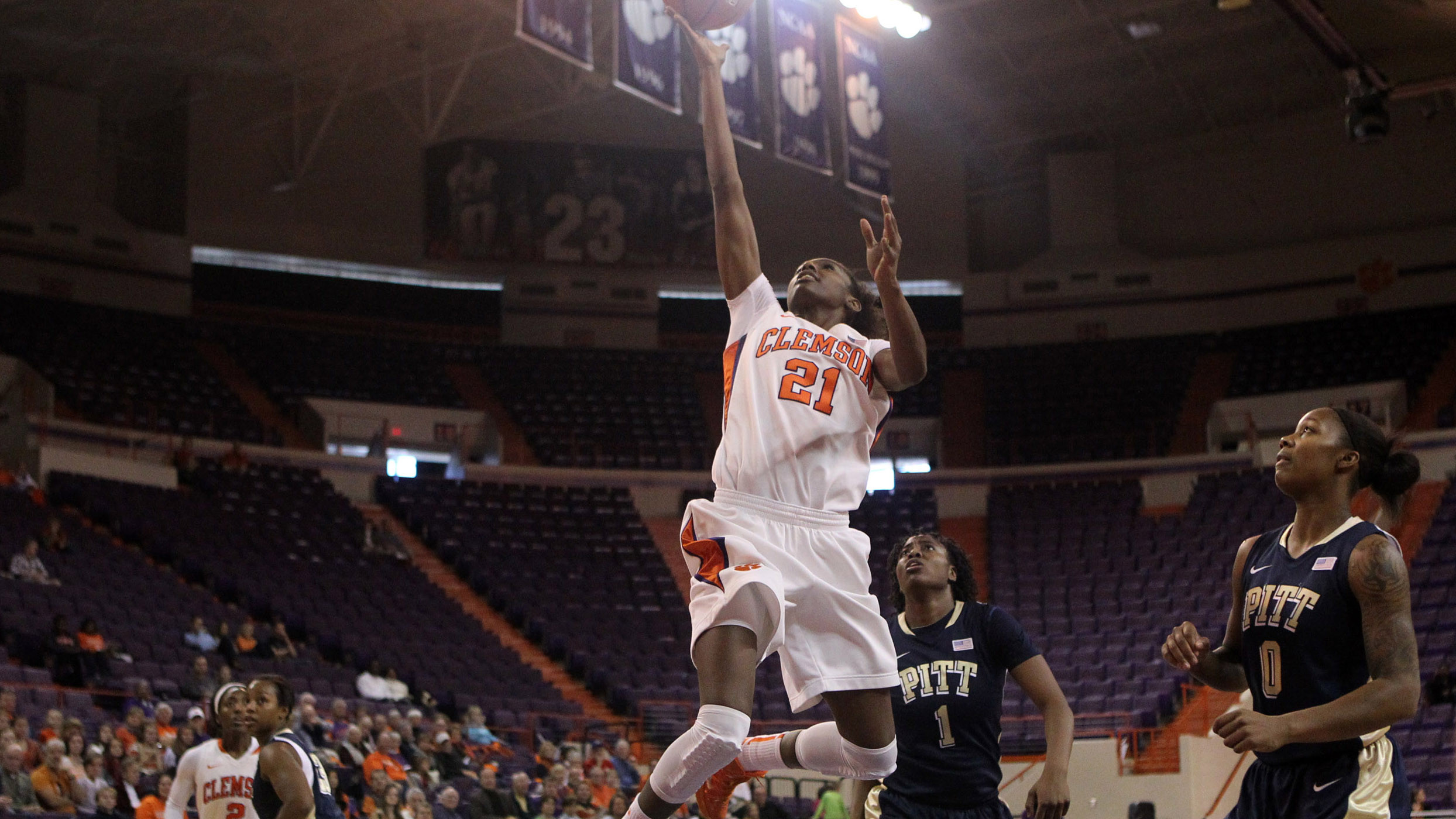 CLEMSON, SC – Junior Nikki Dixon posted career-highs of 29 points and 11 rebounds as Clemson topped Pittsburgh, 77-67, in Littlejohn Coliseum on Sunday in the first meeting between the programs as ACC foes. Clemson (9-8, 1-2 ACC) outrebounded the Panthers (9-8, 1-2 ACC) by 16 and scored 45 points in the second half in the victory, the first in conference play under Head Coach Audra Smith.  Junior Charmaine Tay added 11 points, seven rebounds, and four assists, while Kelly Gramlich scored 14 points, including the 100th three-pointer of her career, as she went 4-8 from behind the arc in the contest.  Reigning ACC Player of the Week Brianna Kiesel had 21 points for Pitt, but was just 5-13 from the floor in playing the full 40 minutes. However, Clemson held the Panthers to an 11-36 (.306) mark from the field in the second half.  The Tigers went to the line 30 times in the second half, and 35 times in the game, making 23.  Dixon was key for the Tigers, hitting 8-15 from the field, including 2-4 from deep, and also went 11-17 from the free throw line. She scored 12 in the first half and 17 in the second half in helping the Tigers emerge from an early seven-point deficit to lead by as many as 13 in the second half.  Nyilah Jamison-Myers had eight points and a season-high seven rebounds in the win, and asserted herself as the tallest player on the floor. She helped Clemson to a 46-30 advantage, and Clemson grabbed 35 of 43 available defensive rebounds.  Clemson actually started the game with a point guard and five wing players, forgoing a true post, in hopes of speeding up Pitt defensively.  The Tigers will play next at nationally ranked North Carolina on Thursday at 6 pm, where the Tigers won the most recent meeting in 2012 in Chapel Hill, 52-47. It was the fewest points by the Tar Heels at home in school history.  Player of the Game: Nikki Dixon – The junior wing had career-highs of 29 points and 11 rebounds, while going 8-15 from the field and getting to the line 17 times Stat of the Game: +16 – Clemson finished the game with a 46-30 advantage on the glass, tied for the best mark of the season Individual Notes

Head Coach Audra Smith Quotes: “It was a great effort all the way around.  We knew that their tallest player on the floor was going to be about six-feet tall, so that’s why we went with the smaller lineup. We tried to jump out and press and we thought that would rattle them.  I was surprised we were able to rattle Georgia Tech and not Pitt, but we tried to go court-to-court and that didn’t work, so then we settled down and mixed it up with some zone and some man.   I’m really proud of the ways the kids played.  I wish we could have taken better care of the basketball, I wish we would have shot better from the free throw line.  I promise you we are practicing free throws, we are working on free throws, we are doing everything.  I like the stat line, everyone contributed.   I’m really happy for Nyilah Jamison-Myers.  Seven rebounds and 8 points.  Thats important for us.  If we can have an inside presence to put up 8-10 points every night and grab some boards, then that’s going to help us win the game.  And of course, I know y’all are going to ask about Nikki – She continues to do the things we ask her to do. Which is what? Attack the basket.  When she does that we are really hard to stop. [<a href=”//storify.com/ClemsonTigers/clemson-v-pitt-jan-12-2014″ mce_href=”//storify.com/ClemsonTigers/clemson-v-pitt-jan-12-2014″ target=”_blank”>View the story “Clemson v. Pitt – Jan. 12, 2014” on Storify</a>]