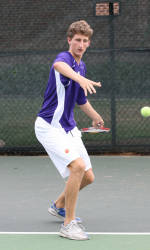 CLEMSON, SC – Derek DiFazio wrapped up play in the USTA National Men’s Open, and Mixed Open Indoor Championship at Flushing Meadows, NY, home of the US Open. DiFazio finished in the quarterfinals of the singles, third place in the Men’s Doubles, and first place in the Mixed Doubles.

“It is great to see Derek do so well and get so many matches under his belt over the holiday season,” said Clemson Head Coach Chuck McCuen. “Derek’s goal is to play pro tennis and he has shown great dedication so far this season. These results will give him a lot of National Ranking points which will help him get into Pro Circuit tournaments. Derek has lofty goals and that is the type of student-athlete we want here at Clemson.”