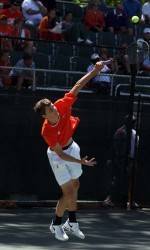 DiFazio won the match decisively 6-4, 6-1 and now plays in the Main Draw of the event which starts Tuesday at 10:00 am. DiFazio got off to a quick start getting an early break of serve in the first set and served it out. The second set was a dominant performance with DiFazio breaking serve three times and getting a 6-1 victory.

Roberson was a four year starter for Boise State University, where he graduated in 2008. Roberson was named All-Conference three of his four years there, and was a member of BSU’s 2005 Conference Championship Team. Roberson has been playing Futures and Challenger Pro Circuit Events since graduation.

“This match had a lot of pressure riding on it,” said Clemson Assistant Coach John Boetsch. Both players wanted badly to get into the Main Draw, and Derek was able to control his emotions very well to play his best. This is some of the best tennis I have seen from Derek. Hard work pays off, and our team, support staff, and coaches have worked extremely hard so far this fall. “

“I’m happy to be moving on against a tough opponent today,” said DiFazio. “Emotions played an important role in many of the matches that were played today and our work with Dr. Lowder has helped me very much in this facet of the game. It’s very exciting to get through the qualies and be playing in the main draw; now I am looking forward to competing for and bringing home some ATP points.”