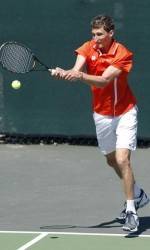 DiFazio got an early lead in the first set and was able to hang on to it. In the second set Goritzka stormed back to win 5-7. DiFazio answered back in the third set battling back from down two match points. DiFazio will later play in the qualifying round against fellow American Eric Roberson.

Goritzka was ranked as high as 1394 ATP singles. Goritzka was also ranked No. 4 in German junior singles in 2006 and placed third in both singles and doubles of the 2007 German Junior Championships. He followed up his 2007 showing at the German junior event with 2008 finishes of third in singles and runner-up in doubles and climbed to as high as No. 3 in the German singles rankings at one time.

“Derek had a quick start again today,” said Clemson assistant men’s tennis coach John Boetsch. “Soren played very well and didn’t miss much for about a set and a half. Derek stayed calm, patient, and had to battle back from two match points down to take this win. He had to dig deep for this one, and all the strength and conditioning work Coach Josh Hudak is doing with our team is paying off.”

“I went on the court with a game plan that worked well in the first set,” said DiFazio. “In the second and third sets he started hitting big and it turned into a battle. I’m very happy to be moving on against a tough opponent.”