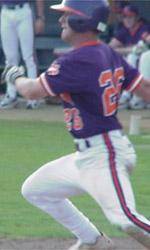 Diamond Tigers Down College of Charleston, 14-6

With the game tied at 2-2 in the fifth, Clemson exploded for seven runs. Schmidt had the big hit in the inning as the right fielder cracked a three-run home run over the left field fence with one out. It was his first home run of the season. The Tigers scored seven runs on five hits in the inning, as the Cougars committed two errors in the frame.

The College of Charleston got on the board first when second baseman Jack Arroyo singled and came around to score on a wild pitch. Clemson counted with two in the fourth, then Charleston countered with a run in the bottom of the fourth on a Steve Jackson wild pitch. The Cougars got back in the game with four runs in the bottom of the fifth, but that was all the scoring for the home team. Clemson put the game out of reach with three in the eighth and two more in the ninth. Arroyo had two hits and scored two runs for the College of Charleston.

Schmidt had four hits, scored three runs and drove in six to lead Clemson’s 18-hit attack. David Slevin added three hits and two RBIs , while Zane Green and Kyle Frank all had two hits apiece. Slevin is now a team best 8-14 at the plate, a .571 average. Schmidt had the only home run of the game, but Frank, Green, Schmidt and Slevin added doubles.

Steven Jackson got the win Clemson to improve to 1-0. He went five innings and gave up six runs, but he struck out 11 and walked just two. Jeff Hourigan, a freshman from Connecticut, had an outstanding first appearance on the mound for the Tigers. He went four innings and allowed just one hit, he walked none and struck out six of the 13 batters he faced.

Ryan Johnson, the Cougar starter, took the loss to fall to 3-1. He gave up six runs and nine hits in 4 1/3 innings.