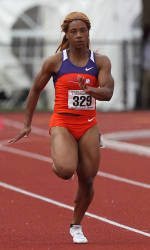 CLEMSON, SC – Dezerea Bryant won the 100-meter dash and finished second in the 200 over the weekend at the USA Junior Track & Field Championships in Bloomington, IN. With both performances, she qualified to compete for Team USA next month at the IAAF World Junior Championships in Barcelona, Spain.

Bryant is the first Clemson athlete to win an event at the USA Junior Championships since Todd Matthews won the men’s 110 hurdles in 1998. The native of Milwaukee, WI will now compete in her second IAAF World Junior Championships. She previously won a gold medal in the 4×100-meter relay in 2010 as a high school junior alongside current Tiger teammate Stormy Kendrick.

Shai Carpenter, a native of Mauldin, SC, took fifth place in the men’s triple jump to earn junior All-America status. He hit a mark of 49’11.75″ on his final attempt and concluded his rookie campaign atop the Clemson record books in the event amongst freshmen.