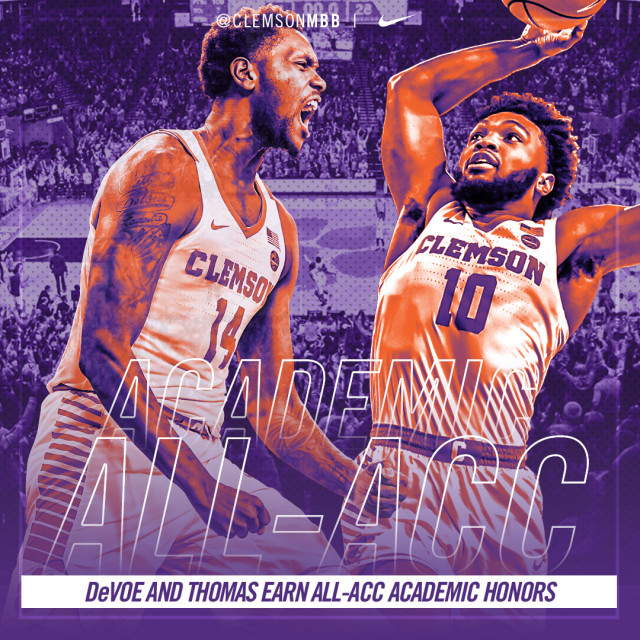 This marks the 14th time in program history that the Tigers have had multiple student-athletes earn All-ACC academic honors.

To be eligible for consideration, a student-athlete must have earned a 3.00 grade point average for the previous semester and maintained a 3.00 cumulative average during his academic year.

This is DeVoe’s third time being recognized for his work in the classroom. DeVoe is third on the Tigers in scoring (13.3 ppg) and leads the team in 3-pointers with 69 – just three shy of tying for 10th all-time for a career at Clemson.

DeVoe has been an ACC Player of the Week honoree this season and has scored a career-high 25 points on three occasions this season, including in the Tigers’ 75-67 win over Georgia Tech last Saturday (Feb. 24).

The Shelby, N.C. native is third in the ACC in 3-point field goal percentage (41.6 percent) and is seventh in threes made per game (2.46). He will graduate in May with a degree in marketing.

Elijah Thomas has been named for the first time in his career to the distinguished list of student-athletes. Thomas has posted eight double-doubles this season after posting two prior to 2017-18. He is fifth on the team in scoring (10.5 ppg) and leads the team in rebounding (7.9 rpg).

Thomas is fourth in the ACC in blocks with 67 and averages nearly 2.4 blocks per contest. He is majoring in Parks, Recreation and Tourism.