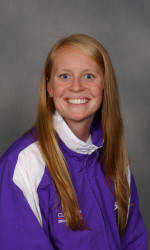 Clemson, SC- Senior Kallie Deters was rewarded for her effort in the final dual meet of her career as she earned the first ACC Performer-of-the-Week honors of her career. She is the second Tiger this year to win the weekly award. Stefan Hirniak (Virginia) and Mikey McDonald (Virginia Tech) shared the men’s award.

The weekly honor was the first for all three competitors. The lone Tiger to pick up the women’s hardware this season, Deters competed in three events in Saturday’s 174-126 win over Duke last Saturday. The senior from Grand Haven, Mich., took first place in the 50 freestyle with a season-best time of 24.18 and was part of the 200 freestyle relay team that touched in with a winning 1:38.11 mark. Deters also placed third in the 100 free, posting a 55.11 in the event.

In the men’s division, Hirniak and McDonald makeup the second duo this year to share league honors. In Saturday’s 124-115 victory against Maryland, Hirniak nearly broke the pool record at the Aquatic and Fitness Center as the Highland Park, N.J., native recorded an NCAA “B” cut time of 1:45.49 in the 200 butterfly. That time is currently the fastest time in the ACC this year in the event.

McDonald, a freshman from Annandale, Va., broke both the school and War Memorial pool records on the one- and three-meter boards as Virginia Tech defeated Washington & Lee and VMI last Saturday. McDonald won the one-meter with 414.83 points and totaled a winning 363.15 points on the three-meter. His score in the three-meter is currently the highest score in the ACC and nearly 14 points above the other divers in the league. Both scores were NCAA Zone qualifying marks.

Up next is the 2007 ACC Women’s Swimming and Diving Championships on February 14-17. The four-day event, which includes the men’s diving championship, takes place at Koury Natatorium on the campus of the University of North Carolina in Chapel Hill.