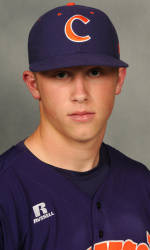 The Tigers put more runners on base, but Wake Forest scored nine runs, including eight in the fourth inning, to defeat #22 Clemson 9-5 in front of 803 fans at Wake Forest Baseball Park on Friday night. The Demon Deacons, who took a 1-0 series lead, improved to 14-35 overall and 5-20 in the ACC. The Tigers, who saw their seven-game winning streak snapped, fell to 32-18 overall and 14-11 in ACC play.

Austin Stadler (3-3) pitched 6.2 strong innings to earn the win. The sophomore lefthander tied his career-high with 11 strikeouts while allowing just six hits, one run, and three walks in throwing 118 pitches. Justin Van Grouw pitched the final 2.1 innings to close out the game. The two Demon Deacon hurlers combined to strand 11 runners on base.

Clemson starter Casey Harman (6-2) suffered the loss, as he yielded seven hits, six runs, and one walk with one strikeout in 3.1 innings pitched. His short outing broke a streak of 20 consecutive starts (dating to 2009) of at least 5.0 innings pitched.

The Tigers took the game’s first lead in the third inning. Wilson Boyd led off with a walk and advanced to second two batters later on Will Lamb’s sacrifice bunt. Mike Freeman then laced a two-out single through the right side to score Boyd. It also extended Freeman’s hitting streak to 18 games.

The Demon Deacons took the lead with eight runs in the fourth inning. Steven Brooks led off with a double down the left-field line and scored on Mike Murray’s double to center. Matt Conway followed with a single up the middle on an 0-2 pitch. Mac Williamson gave Wake Forest the lead when he belted a three-run homer to left field on a 1-2 pitch. Carlos Lopez kept the heat on when he grounded a double over the third-base bag on a 1-2 pitch and Shane Kroker walked. Mark Rhine’s sacrifice bunt moved the runners up a base and Pat Blair walked to load the bases. Ryan Semeniuk walked on five pitches to score Lopez and Brooks’ sacrifice fly to right plated Kroker. After Semeniuk stole second, Murray hit a routine grounder to Freeman at second, but the ball took a high hop and bounced over Freeman’s glove for a double to score Blair and Semeniuk. The eight-run frame tied for the second-most runs allowed by the Tigers in the fourth inning in history.

Williamson led off the fifth inning with a solo homer to right-center, his second long ball of the game and seventh of the season.

The Tigers cut into the Wake Forest lead in the eighth inning. Leadoff batter John Hinson led off the frame by reaching on a dropped pop-up in the infield and went to third on Brad Miller’s single to right field. Two batters later, Boyd walked to load the bases with one out, then Hinson scored on a wild pitch. But the next two Tigers were retired to keep Wake Forest up 9-2.

Williamson led the Demon Deacons’ 10-hit attack by hitting two home runs for the second game in a row, as he had four RBIs on his long balls. Murray added two doubles and three RBIs.

Hinson went 2-for-5 with a homer, two RBIs, two runs, and a steal for Clemson, who had nine hits. Freeman added two singles, while Miller went 2-for-3 with a homer and two walks.

Clemson and Wake Forest will play game-two of the series on Saturday at 6:00 PM.