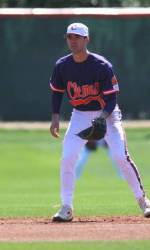 Wake Forest scored four runs in the sixth inning and held on to defeat #17 Clemson 5-3 in the first game of a doubleheader at Hooks Stadium on Sunday. The Demon Deacons, who took a 2-0 series lead, improved to 7-4 overall and 2-0 in the ACC, while the Tigers fell to 6-4 overall and 0-2 in ACC play. Wake Forest has defeated Clemson four times by a combined victory margin of six runs in the last two years.

J.D. Burgess had two of the seven hits for Clemson, who left eight runners on base. Doug Hogan’s 24-game hitting streak came to an end, as he was 0-for-3.

The Demon Deacons took the game’s first lead in the third inning. Steven Brooks led off with a walk, moved to second on Andy Goff’s sacrifice bunt, and went to third on Ben Terry’s groundout. After Brett Linnenkohl walked, Brooks scored on a passed ball. It was Hogan’s first passed ball of the season.

In the top of the fifth inning, John Nester led off with a line-drive single to left field and advanced to second base on Alex Lee’s sacrifice bunt. After Stan Widmann hit a grounder to third-baseman Allan Dykstra. Dykstra’s throw was high and allowed Nester to score from third base.

The Demon Deacons regained the lead in the sixth inning with four runs thanks again to more “free passes.” Linnenkohl reached on a walk with one out then stole both second and third base. After Willy Fox drew another walk, Dykstra singled through the right side to score Linnenkohl, then both Fox and Dykstra moved up on a wild pitch. Murray followed with a double up the middle to score Fox and Dykstra. Two batters later, Evan Ocheltree’s single through the right side plated pinch-runner Austin Jones to give Wake Forest a 5-1 lead.

The Tigers finally broke through with a hit with runners in scoring position in the eighth inning. Hogan reached with one out on an error when a pop fly to shallow right field fell. Kyle Parker followed with a walk and Jeff Schaus flied out for out #2. Burgess came through with a single up the middle to score Hogan. Pinch-hitter Chris Epps then singled to second base to score Parker, cutting Wake Forest’s lead to 5-3.

Clemson and Wake Forest will play the second game of a doubleheader and series-finale at 2:10 PM.