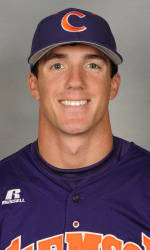 The Demon Deacons broke the game open with six runs in the fifth inning and never looked back. The Tigers were shut out for the first time since 2011 after going the previous 98 games without being shut out. It also marked Wake Forest’s first shutout against Clemson since April 8, 1969, when the Demon Deacons blanked Clemson 11-0 in the second game of a doubleheader in Winston-Salem. Clemson had scored at least one run against Wake Forest in 130 consecutive games. It was the Demon Deacons’ first three-game sweep over the Tigers since 1999 as well.

Brian Holmes (7-2) earned the win by pitching 6.0 strong innings in a starting role. He gave up just two hits, no runs, and three walks with six strikeouts. Six Wake Forest relievers combined to toss 3.0 scoreless innings to close out the game. The seven Demon Deacon hurlers combined to allow only four hits. Clemson’s leadoff batters reached base in four of the first six innings, but they still kept the Tigers off the scoreboard.

Tiger starter Kevin Pohle (6-3) suffered the loss, as he yielded five hits, six runs (five earned), and three walks with four strikeouts. The seven Clemson pitchers only allowed two leadoff batters to reach, but in those two innings, Wake Forest scored all seven of its runs.

Wake Forest took the game’s first lead with six two-out runs on four two-out hits in the fifth inning. Pinch-hitter Kevin Jordan fouled off several two-strike pitches to draw a leadoff walk and moved to second on Brett Armour’s sacrifice bunt. Two batters later with two outs, Pat Blair was intentionally walked. After fouling off several two-strike pitches, Conor Keniry blooped a 2-2 pitch to shallow right-center for a single to score Jordan, who became the first player in the game to reach third base. Mac Williamson loaded the bases with a hit-by-pitch, then Carlos Lopez laced a single up the middle to score Blair and Keniry. Charlie Morgan kept the inning alive with a triple down the right-field line to score Williamson and Lopez. Mark Rhine followed with a chopper to second-baseman Steve Wilkerson, who booted the ball, allowing Morgan to score.

In the sixth inning, Evan Stephens led off with a walk and Blair was hit-by-pitch. Two batters later with one out, Williamson grounded a seeing-eye single through the right side to score Stephens.

Morgan went 2-for-4 with a double, triple, and two RBIs to lead Wake Forest, who had eight hits in the game. Williamson added two hits and an RBI as well.

Brad Felder went 1-for-2 with a walk for the Tigers, who totaled only four hits.

Clemson finished in a tie for fifth place with Miami (FL) in the ACC overall standings with a 16-14 league mark. Since the Tigers won the season series against the Hurricanes, Clemson will be the #5 seed in the ACC Tournament at NewBridge Bank Park in Greensboro, NC. The Tigers will play at least three games in the ACC Tournament, which starts on Wednesday. Clemson’s tourney schedule will be announced on Sunday.