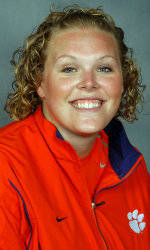 Clemson senior track & field performer Della Clark is ranked among the latest ‘Dandy Dozen’ in the weight throw, according to Trackwire. A native of Acworth, GA, she owns the second-best mark in school history with a personal best of 66’1.75″. Only Jamine Moton, former NCAA All-American, produced better marks in the 20-pound weight throw.

Clark has competed at three meets and posted NCAA provisional qualifying efforts each time. Her personal best came at the most recent meet, the Clemson Invitational. She won the event at that meet and is listed #6 in the country according to the latest rankings. Her mark is actually the fifth-best in the nation so far this indoor season.

In other women’s track & field news, newcomer Patricia Mamona currently holds the sixth-best triple jump mark in the nation. She hit a leap of 42’1.5″ at the Kentucky Invitational, her first-ever collegiate meet. That mark ranks fifth in school history in the indoor triple jump.