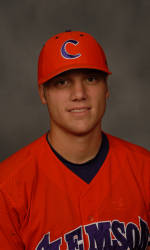 Trey Delk pitched 7.0 scoreless innings of two-hit ball with seven strikeouts to lead Clemson to a 6-0 victory over Western Carolina in front of 1,864 fans at Hennon Stadium on Tuesday night. The Tigers, who split the home-and-home series with the Catamounts, improved to 20-20-1, while Western Carolina fell to 18-21.

Delk (1-0) earned his first win as a Tiger in his first career start, as the first-year junior-college transfer pitched 7.0 innings and struck out seven batters, both career-highs, against just two walks. Delk threw 100 pitches (65 strikes), as he teamed with relievers Justin Sarratt and Matt Vaughn to hold Western Carolina to a season-low three hits.

It was the first time all season the Catamounts were shut out, as they entered the contest with a .314 team batting average. The Tiger trio of Delk, Sarratt, and Vaughn limited Western Carolina hitless in eight at-bats with runners in scoring position and 11 at-bats with runners on base.

In the first inning, Mike Freeman led off with a single to center and Jeff Schaus followed with an infield single that could have been a double play had Ottone not deflected the hard-hit one-hopper. Schaus was erased at second base on Kyle Parker’s fielder’s choice, as Freeman advanced to third. Freeman later scored with two outs on a wild pitch.

In the second inning, the Tigers scored three runs after the first two batters of the frame were retired. Stan Widmann’s single through the left side. The ball went under left-fielder Jason Haynes’ glove, allowing Widmann to move to third base on the error. After Freeman was hit-by-pitch, Schaus lined a single to right field to score Widmann, as Freeman advanced to third. Freeman then scored when shortstop Brent Greer booted Parker’s groundball.

The Tigers threatened to add to their lead in the fifth inning, but an outstanding defensive play kept the Catamounts within four runs. Wilson Boyd hit a two-out double down the left-field line and Doug Hogan walked. After just missing a home run to the right of the right-field foul pole, Ben Paulsen belted a ball to deep center. But centerfielder Dylan de Graaf made a running catch near the “warning track” to rob Paulsen of an extra-base hit.

In the top of the ninth inning, Freeman led off with a double to left-center and scored on Schaus’ double down the right-field line. Two batters later, Boyd doubled down the left-field line to plate Schaus and give Clemson a six-run lead.

The Tigers, who totaled 10 hits, were led by Schaus’ three hits. Freeman went 2-for-4 with three runs scored, while Boyd hit two of Clemson’s five doubles and drove in a run.

Three different Catamounts had a hit, including Nick Liles, who extended his hitting streak to 12 games.

The contest was the annual homecoming game for Tiger Head Coach Jack Leggett, who was the head coach at Western Carolina for nine seasons (1983-91).

Clemson will travel to Fluor Field in Greenville, SC to take on Presbyterian on Wednesday at 7:15 PM. Clemson will be the designated home team and occupy the first-base dugout for the neutral-site contest.