Delicia Washington || From WIP to Legend

Delicia Washington finished her two-year Clemson career as one of the most decorated players in school history, cementing her status as a new-era Clemson legend.

Washington earned a Second Team All-ACC nod in 2021, but it was her improvement, especially in conference play, that propelled her to a First Team honor in 2022. 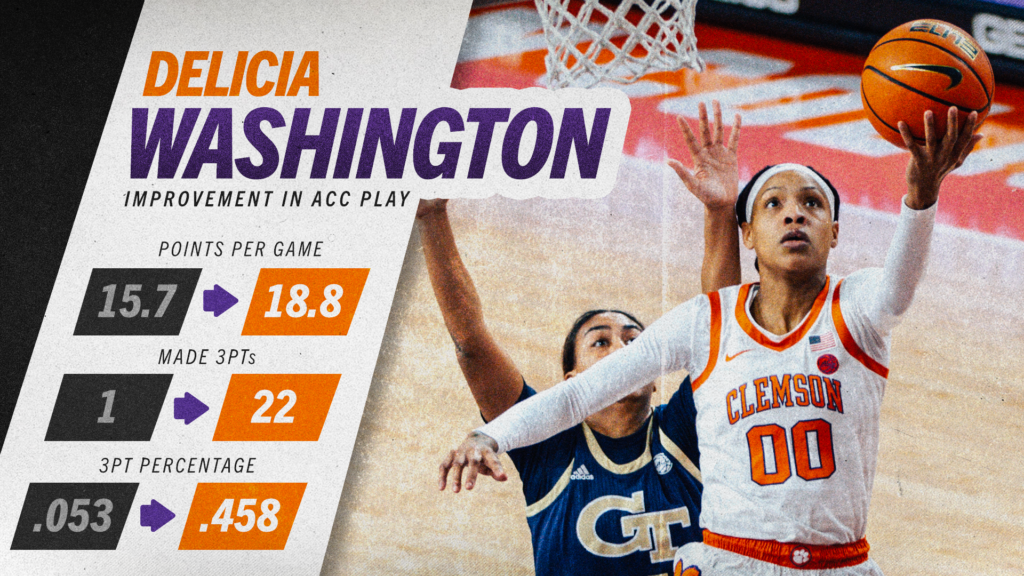 Big week for @Washing4Delicia, again named the ACC Co-Player of the Week!

Against #14 Georgia Tech on February 13, Washington earned her way into the Clemson record book, going off for 40 points against the Yellow Jackets. Even though the Tigers lost in overtime, it was the first time since 1982 a Clemson player had scored 40 and the first time in history someone NOT named Barbara Kennedy achieved the feat.

Yeah the #SuperBowl is cool, but have you ever watched a super cut of @Washing4Delicia scoring 40? 😍 pic.twitter.com/P3mCygdr4O

She scored in double figures in seven of eight games and turned in 25+ twice.

In the ACC Tournament, Washington went off for 33 points and 11 rebounds against Syracuse, avenging a 40-point loss in December with a 19-point win in March. She also turned in 19 against Virginia Tech in the Tigers’ second round loss, earning second team All-Tournament honors.

In what was originally supposed to be her only year as a Tiger, Delicia Washington made an immediate impact for Amanda Butler’s program. She was named to the All-ACC Second Team after averaging 16.4 points and 6.0 rebounds per game. Her scoring average at the time was the highest by a Tiger since 2003-04 (Lakeia Stokes, 17.0 ppg). Washington produced 23 double-digit scoring games, including a then-career-high 33 points against Florida State. She finished second on the team in rebounding (6.1) and led the team in assists with 88.

Washington was Clemson’s first All-ACC selection since Kobi Thornton in 2019 (second team) and just the fourth in the last 17 seasons. Washington surpassed the 1,000 career point mark earlier that season, and scored in double-figures in every game since coming back from an ankle injury in mid-December 2020.

She was also named to the ACC All-Academic team and graduated in May of 2021 with a degree in Pan African Studies.