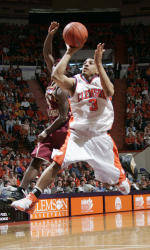 WINSTON-SALEM, N.C. (AP) -Michael Drum’s putback with 3 seconds left lifted Wake Forest to a 67-65 victory over Clemson on Wednesday night and denied the Tigers their 20th win of the season.

Clemson’s James Mays made two free throws to tie it 65-65 with 34.9 seconds left. Ishmael Smith was thinking shot as he brought the ball down the floor, but at the last second passed to Kyle Visser, who missed from close range. Drum swooped in for the rebound and banked his shot in.

K.C. Rivers raced down the left side and fired up a last-chance shot from close range, but Visser appeared to deflect it as time expired.

Mays finished with 16 points, Cliff Hammonds had 12 and Trevor Booker added 10 points for the Tigers, who were just 5-of-26 from 3-point range.

L.D. Williams had 11 points and Jamie Skeen added 10 for the Demon Deacons.

During the second half, Clemson led twice by six points before Wake Forest went on a Visser-keyed 8-0 run that was capped when Williams’ jumper from the left wing with 2:12 left put the Demon Deacons up 64-62 – their first lead since the opening moments of the half.