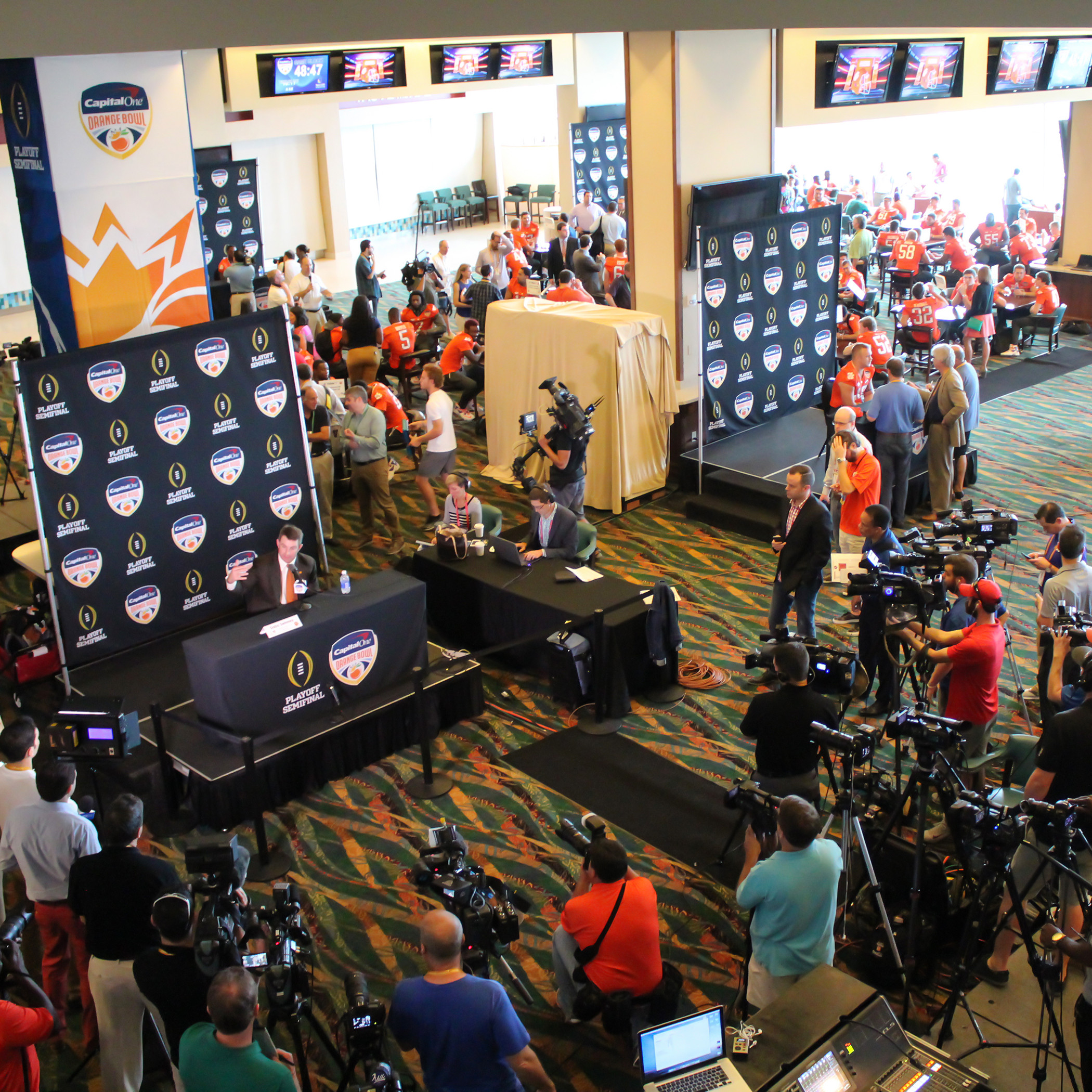 The Tigers began the day with a 6:50 a.m., departure from the team hotel to the Orange Bowl Prayer Breakfast at Jungle Island. Head coach Dabo Swinney introduced Travis Blanks, who gave an inspirational testimonial. After his 10-minute message, he received a standing ovation.

Every player on the trip was available to be interviewed during Media Day at Sun Life Stadium. From 10 a.m., to 11 a.m., players and coaches gathered inside a large open area and took questions from scores of reporters. Many of the interviews were carried live on ESPN.

After getting a feel for the situation, many players began interviewing teammates. It was quite an experience for many of the younger players who have yet to see extensive game action, as they took questions ranging from, “if you could meet anyone in the world, who would it be?” to questions about the bowl trip. The most popular question or request was for the players to “Dab.”

Clemson’s third and final practice at Nova Southeastern saw the hottest of the three days, mainly due to the lightest winds of the trip. Only 10 periods were on the schedule thanks to the game being less than 48 hours away, as the Tigers continued to fine tune their gameplan.

We welcomed two members of the ESPN broadcast crew in Todd Blackledge and Holly Rowe to practice. They will join Brad Nessler as the broadcast team for the first time calling a Tiger game in 2015. However, they have called many Clemson games in previous seasons.

Former Tiger wideout Jacoby Ford (2006-09), a native of nearby Royal Palm Beach, Fla., also stopped by on what would normally be a Thursday practice during the regular season.

The Tigers concluded another jam-packed day with a dual-purpose event. The players ate dinner at Dave & Buster’s, and a select group of Tigers ate with youngsters from Big Brothers Big Sisters of Miami at the same restaurant.

After the dinner, Deshaun Watson, Artavis Scott, Joe Gore and many other players who gave those youngsters an experience they will never forget made their way to the gaming area, where B.J. Goodson and Charone Peake among others shared similar experiences with youngstes from Big Brothers Big Sisters.

Just like 10 days earlier, when players enjoyed fun & games at Frankie’s Fun Park in Greenville, they did the same with what seemed like hundreds of games.

[View the story “Clemson Football – Day 4 in Miami” on Storify]