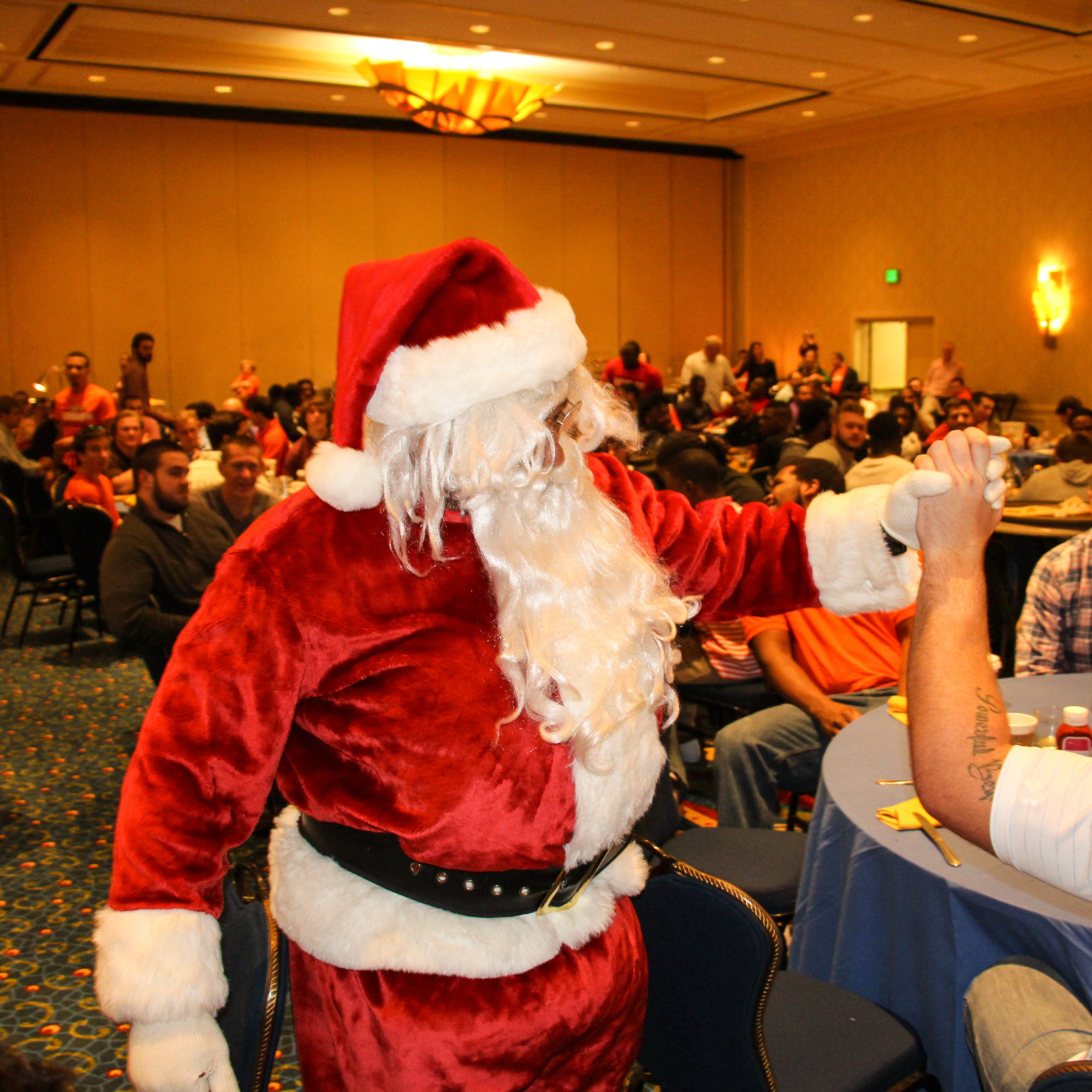 Merry Christmas! The day started off with the Clemson Family coming together for a Christmas Brunch at the team hotel. The smiles on everyone’s faces foretold of the special day and meaning to Head Coach Dabo Swinney and the program.

Along with the wonderful brunch, singers performed, from the daughters of Jeff Davis, to a “Rudolph” karaoke by Grady Jarrett and his fellow co-captains, to a tremendous vocal performance by Chad Richardson.

Santa Claus then made an appearance at the end of the brunch to hand out bowl gifts to all the Tiger players.

What a difference 24 hours made. After the Tigers sweated through much of Wednesday’s practice with temperatures in the 80s, Thursday’s practice on Christmas Day at Orlando Citrus Bowl Stadium was in the low 60s, but it felt much colder than that with a constant breeze. Clemson went through 17 periods and three additional periods for the junior varsity squad with the same enthusiasm that it had Wednesday.

A big surprise at practice was a visitor Clemson received…Trevor Immelman. The 2008 Masters champion, Orlando-area resident and Tiger fan met Head Coach Dabo Swinney a few years ago, and the two have been friends ever since. Swinney met with Immelman and his family prior to practice and even received some golf tips from the PGA Tour member.

Swinney commented to the team after practice how pleased he was with the players’ effort in prepartation for the Russell Athletic Bowl against No. 24 Oklahoma on Monday.

After an amusing day at Magic Kingdom on Wednesday, all the Tiger players had to do to go to SeaWorld was walk across the street from the team hotel. Practice concluded a few hours later than Wednesday’s practice, so most of the time spent at the park was during night time.

The players immediately headed to the rides, including the infamous “Kraken” roller coaster. Many of the players like Martin Jenkins and Garry Peters rode the ride three or more times, which could be done due to smaller crowds because of the cooler temperature. Many came off the ride shaken, to say the least.

The players headed over to Shamu Stadium to see the “One Ocean” show. Luckily for the players, they did not get wet even though they sat in the lower section (thanks to Jenkins for the strategic seating location).