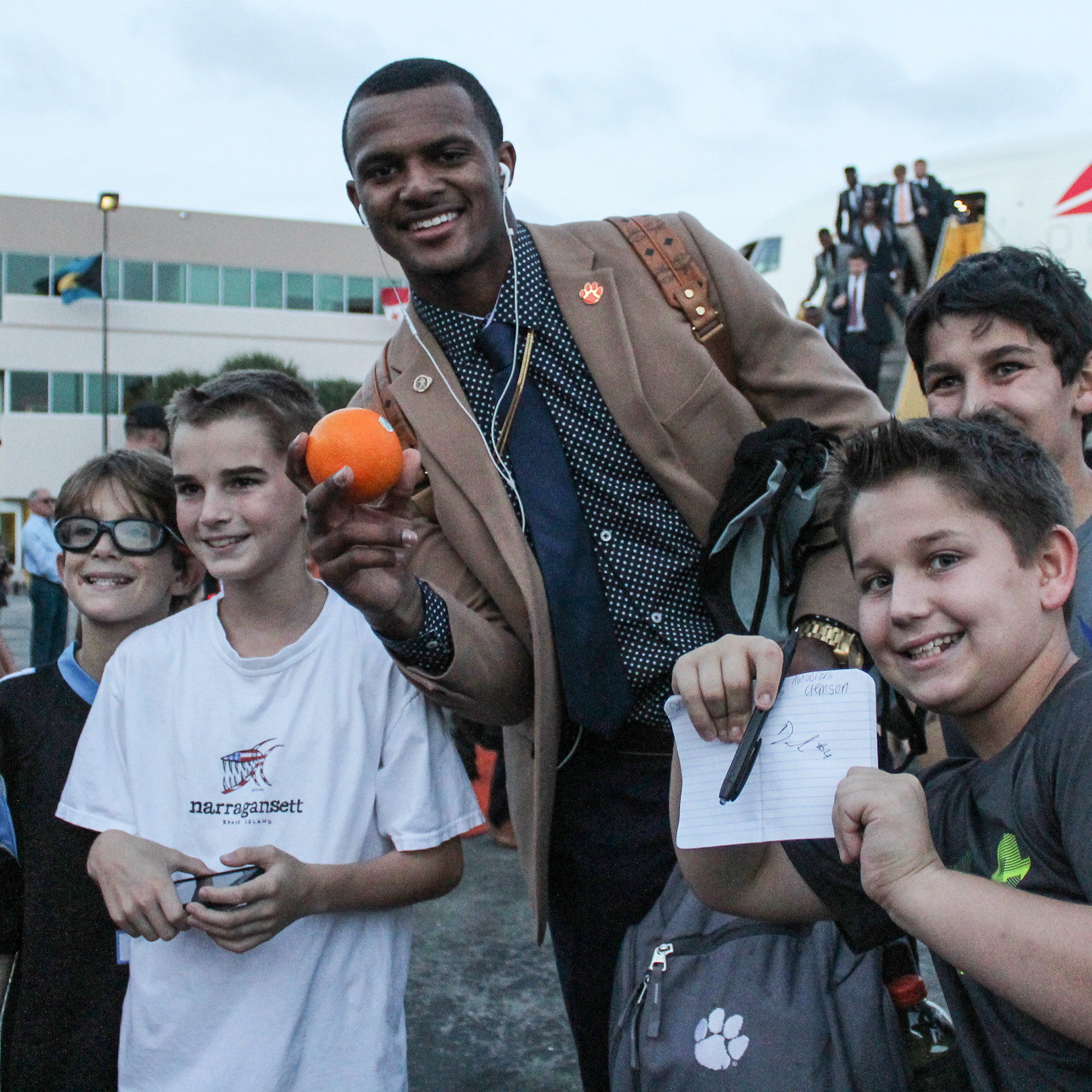 Bowl week has arrived! Tiger players and staff returned to Clemson on Christmas night, then woke up and held their final practice in Tigertown. After the practice, in temperatures reaching all the way into the 70s, the team watched a highlight video of big plays and games from the 2015 season on the Death Valley videoboard.

A few hours later, the team boarded buses and were sent off by a throng of Tiger fans at Memorial Stadium. Two planes were waiting at GSP to transport all the players and staff members southward.

After a slight delay due to high air traffic volume in Florida, the two planes arrived just minutes apart. Upon deplaning, Tiger players and coaches were greeted with big smiles from Orange Bowl Committee members donning their trademark orange blazers. And of course, an Orange Bowl arrival, which the Tigers have experienced three times the past five years, would not be complete without being handed an orange.

The Tigers got their first look at the team buses, which are adorned with head coach Dabo Swinney and Clemson’s 10 First-Team All-ACC selections in 2015, while Swinney, Eric Mac Lain and Kevin Dodd met with the media that is already out in force five days before gameday.

The first course of business for the players and coaches was to hold its team meeting. Swinney introduced several speakers, who covered various topics ranging from security to shuttles to hotel policies.

Swinney then spoke for 20 minutes to the players, emphasizing what’s at stake this week in Miami. He went over his traditional rules and regulations, covering nearly every possible aspect of the bowl trip. In terms of Thursday’s game against Oklahoma, his main message was “Finish the Race.”

The final team activity of the day was one players were looking forward to all week. They gathered in a large ballroom at the team hotel to choose bowl gifts, which had assigned values of 1-8. The players had a total number of points to use, so they took their time to figure out the best combination of gifts.

All kinds of gifts were available for the players, ranging from the latest electronic gadgets to watches to furniture. The gifts must be mailed to the players back home, where they will receive them in January.

[View the story “Clemson Football – Day 1 in Miami” on Storify]