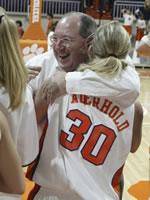 Clemson posted a 17-12 record this past season and advanced to the women’s NIT. Davis has been the head coach of the Lady Tigers since the 1987-88 season and has guided the program to 16 postseason appearances in his 17 years. His resume includes 14 NCAA tournament appearances and 11 final top 25 national rankings, and 11 seasons with at least 20 victories. Four times Davis has taken Clemson to the Sweet 16 of the NCAA Tournament, including a berth in the regional finals in 1991.

“I hope to be the head coach at Clemson for a long time to come,” said Davis. “Our objective is to get the program back to the point where we are contending for ACC and National Championships. I am extremely pleased the Dr. Phillips has confidence in me and my staff.”

” This contract extension shows that we have total confidence in Coach Davis’s abilities to lead this program, and we look forward to having him as our coach for the long term,” said Phillips. “The Lady Tigers have shown improvement this year and have represented the University well in all phases.

“We realize Coach Davis strives to reach the NCAA Tournament, as he has many times before. We are going to give him all the administrative support necessary to reach that goal.”