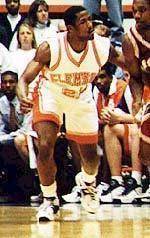 Former Clemson basketball players Greg Buckner and Dale Davis will begin play in the 2006 NBA Playoffs this weekend. Buckner is a part time starting small forward for the Denver Nuggets and Davis is a reserve center for the Detroit Pistons.

Buckner is in his seventh year in the NBA, his second with the Nuggets. This past regular season, the 2005 Clemson Hall of Fame inductee played in 73 games, 27 as a starter. The former All-ACC Tiger who helped Clemson to three NCAA Tournaments averaged a career high 6.7 points and 2.4 rebounds per game. He led the Nuggets in three-point goals with 86 and led the NBA in steals/turnover ratio. He also shot 78.2 percent from the free throw line in his finest all-round year as a professional.

Davis played in 28 games in 2005-06, two as a starter, as a backup center for the Pistons. He averaged 0.9 points and 1.9 rebounds per game for the Pistons, who are the number-one seed in the Eastern Conference Playoffs. Davis just finished his 14th regular season, the most experienced player on the Pistons roster.

Davis, a senior at Clemson in 1990-91 and a member of the Clemson Ring of Honor, has played 1,048 career NBA games in his 14 years in the league. He has averaged 8.2 points and 8.1 rebounds per game over his career and has a 53.1 career field goal percentage, ranked among the top 25 in NBA history and in the top five among active players. He is a veteran of 121 career playoff games, including 116 as a starter. He helped the Indiana Pacers to the NBA Playoff Finals in 2000.