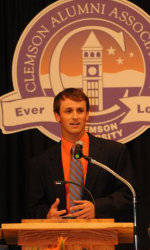 Clemson student-athletes are presented with many opportunities to serve and develop confidence as they give back. Clemson golfer and Solid Orange Squad member David Dannelly had such an opportunity to speak to Alumni about his opportunities at Clemson. Here is his thank-you note to the Alumni Group.

Clemson University has been known for its success in academics and athletics; which is only possible because of our history, the people within the University, and the primary devotion by our generous alumni. For me, this could not have been more evident than this weekend when the Class of 1961 returned to Clemson University to celebrate its Golden Anniversary. In addition, they presented the school with a $2 million dollar check. The symbolic check represents 10 years of advantageous efforts by Clemson’s leaders en route to the University’s Top 20 goal.

On Saturday, June 11, I was invited to the Golden Tiger Breakfast, where members and guests of the society honored the Golden Tiger Class of 1961. Representing the student-body, and as a member of the men’s golf team and Solid Orange Squad, I had the opportunity to share my experiences and involvement with the University. Although in truth, the focal point was having the honor of introducing the morning’s speaker, George Bennett from the Class of 1955.

Mr. Bennett was commonly referred to as Clemson’s Chief Ambassador for Athletes. One noteworthy, but relatively unnoticed, fact is that he originally instituted the cannon firing at football games after a touchdown. Twice he held the position of IPTAY’s Executive Director. Leaving once to pursue other career opportunities, but his final retirement in 2004 was after 11 years of continuous service – during which IPTAY had significantly increased its membership and contributions had doubled. Some of his achievements include: National Athletics Fundraiser of the Year, 1984; Alumni Distinguished Award, 1986; Lifetime Achievement Award from the National Association of Athletics Directors; and the University’s highest public honor in 2009, the Clemson Medallion.

On behalf of the student body, and especially all student-athletes, I would like to thank Mr. Bennett and every Class before us for making Clemson a better and stronger University.