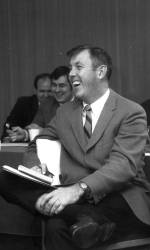 During the middle of my first year as Clemson sports information director, I had some problems with a few of our beat writers contacting our football players without going through my office. Danny Ford had just resigned as head coach and it was perhaps the most tumultuous time in the program’s history. Many of our players were upset with the coaching change and they were “ripe for the picking.”

I was frustrated, and my first inclination was to prohibit any media person from further interviews if they contacted our players directly. Word got around that I was thinking about doing this and I got a call from Dan Foster, the respected sports editor of the Greenville News.

Foster passed away today (May 22, 2009) and the first thing I thought of was that phone call because he provided me with words of wisdom.

Foster had more credibility with me than most sports writers because he had been in my shoes. The 1949 Furman graduate had served as that school’s Sports Information Director (in addition to working for the Greenville Piedmont) during the 1950s when he helped put the Paladin basketball program on he map by championing the accomplishments of Frank Selvy and Darrell Floyd, who led the nation in scoring twice apiece between 1953-56. Selvy still credits Foster with his selection to various All-America teams during his career.

Foster told me that afternoon in January of 1990 that the way to deal with media that went behind my back to contact athletes was to “work backwards through your athletes.” What he meant was that I should meet with the players and tell them not to talk to the media unless they had gone through my office, because if they were contacting them directly, they were probably up to no good.

Dan pointed out that barring media from players is the beginning of a strained relationship and that is a difficult battle to win. It is a two-way street over time. The media needs Clemson and Clemson needs the media. Dan also said that after the writers got rejected by a couple of players they would come crawling back to me begging for assistance.

After that phone call with Foster, I called a team meeting and implored our players to turn down interview requests that were not made through my office. They complied and eventually things settled down. I still have the same meeting with our athletic teams today, and it is a practice that I have passed on to many other SIDs over the years.

Dan Foster was never one of the media who went behind my back to contact our athletes in any sport. He was the consummate professional who treated you with respect and thus received respect in return.

This is not to say that everything he wrote about Clemson was positive. I remember many days as an assistant SID, that he drove Bob Bradley to some frustrating moments. When he made Mr. B mad he used to call him “Desperate Dan” Foster. But Mr. Bradley was just fighting for space in the Greenville News on the Tigers, and Dan Foster was trying to be fair to all the teams in the area.

If Mr. Bradley was alive today, upon reflection, he would have great things to say about Dan Foster. Over his 52 years with the Greenville News and Greenville Piedmont, he authored many profiles about Bradley’s favorite Clemson athletes and coaches. Mr. B documented Clemson’s history through Clemson publications, recreating many an entertaining story about Frank Howard, Banks McFadden, Fred Cone and Bill Wilhelm.

But, when Dan Foster wrote those stories, he gave credibility to Bradley’s writings. Everyone knew Foster was not a Clemson graduate, and unlike Bradley, it was not his job to promote Clemson. So when Foster had a good Clemson story, it resonated and brought new fans to what is now considered “Clemson Nation.”

Foster’s articles will live forever in the minds of Clemson fans. I am wiling to believe he was the last surviving member of the media who covered Frank Howard in the 1950s. He was present (see photo) at the Clemson House the day Coach Howard retired. He covered nearly 70 percent of Clemson’s bowl games and countless ACC basketball tournaments and regular season games.

I am willing to bet many Tiger fans over the age of 40 have saved articles from the 1981 National Championship season and many were written by Foster.

That season, as an assistant SID, I was responsible for putting together a book of articles on the season before the Orange Bowl. One of the articles Foster wrote was a feature on Herschel Walker in December of 1981. Entering the Orange Bowl some members of the media were saying Georgia had the better team than Clemson at season’s end, and that Clemson’s win over the Bulldogs in September was a fluke because Georgia had committed nine turnovers.

Mr. Bradley and I were concerned that if Clemson beat Nebraska in the Orange Bowl and Georgia beat Pittsburgh in the Sugar Bowl that the voters might still give Georgia the final number-one ranking because Walker was so popular. But Foster wrote a story with Walker on December 6, 1981 that had the headline, “If both win, Walker would vote for Clemson.”

I put that article on page one of the postseason media guide to give the Tigers a boost in case both teams won their respective bowl games. But, it became a moot point when Pittsburgh beat Georgia in the Sugar Bowl. But we REALLY appreciated that article at the time.

In addition to Dan Foster’s impact on Clemson athletics, it should be noted that he was prominent nationally. For many years he covered national events, bringing a local perspective back to the upstate on the World Series, national boxing matches, the Kentucky Derby, the Super Bowl, and of course the Masters. He was honored in recent years by Augusta National for his years of coverage. (Check out his 1962 story on Arnold Palmer on Greenvilleonline.com today.)

He was the most nationally connected media person this area has ever seen. In the 1970s and 1980s Clemson fans found out what bowl game the Tigers were going to by reading Dan Foster. Heck, I worked in the athletic department and I remember picking up a Greenville News on a Sunday and learning our bowl game destination.

Foster traveled in the sports media’s version of the “Rat Pack” in the 1960s, 70s and 80s with Jim Murray of the Los Angeles Times, Edwin Pope of the Miami Herald, Blackie Sherrod of the Dallas Morning News and Furman Bisher of the Atlanta Constitution.

Dan Foster provided a guiding light for young sports media who worked with him in his 52 years in the business. At times, he provided young sports information directors with words of wisdom as well.