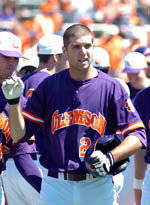 D’Alessio had a big night at the plate for Clemson, tallying a career-high four hits, two homers, and three runs scored. Marquez Smith was 3-for-5 with a game-high three RBIs, while Wilson Boyd and Addison Johnson also had two hits apiece.

Clemson totaled 14 hits on the night and was 8-for-16 with runners in scoring position. The Tigers also scored in each of the first six innings, as the only inning they did not cross home plate was the seventh.

Matt Wieters had two hits and two RBIs, and Brad Feltes went 3-for-4 with three runs scored for the Yellow Jackets.

Boyd started things off with a one-out double down the right-field line in the bottom of the first. Taylor Harbin was then hit by an 0-2 pitch, and D’Alessio followed with a walk to load the bases. Smith then laced a single up the middle, scoring both Boyd and Harbin to put the Tigers on the scoreboard 2-0.

J.D. Burgess added a run in the second when he lofted a single to right-center to score Johnson, who led off with a triple.

The Yellow Jackets got on the board with one run in the third. With one out, Feltes reached on a fielding error by Burgess. Danny Payne followed with an infield single. Michael Fisher then reached on a fielder’s choice that erased Payne. With two outs, Wieters doubled to left-center, scoring Feltes. Wally Crancer walked to load the bases. Tony Plagman then laced a ball in the gap in right-center, but D.J. Mitchell flagged down the well-struck ball and saved at least two runs.

D’Alessio upped Clemson’s lead by one when he hit a solo homer down the left-field line just inside the foul pole in the bottom of the third inning.

The Tigers tacked on two more runs in the fourth. With one out, Johnson reached first on an fielding error by Patrick Long. Two batters later, Mitchell singled through the right side on a hit-and-run that allowed Johnson to reach third. Boyd then doubled to left field, scoring Johnson and Mitchell, to give the Tigers a 6-1 lead.

Wieters added a run for Georgia Tech in the fifth when he hit a two-out single to right field, scoring Feltes, who earlier singled.

In the bottom of the fifth, D’Alessio led off with a sharp single up the middle, advanced to second on a wild pitch, and moved to third on a single by Smith. Paulsen then drove in D’Alessio with an infield single. Hogan drew a walk to load the bases. Johnson then lofted a single to center, scoring Smith to put the Tigers up 8-2.

Clemson added a run in the bottom of the sixth, as Smith doubled to center to score Harbin, who reached on a fielding error by Feltes.

In the top of the seventh, Feltes led off with a single up the middle. With one out, Fisher drew a walk. Wieters was hit by a pitch to load the bases. Crancer then dumped an 0-2 pitch into right field for a single to plate Feltes.

Clemson reached double figures in runs in the eighth inning, as D’Alessio blasted a two-out, solo homer to left-center, his second long ball of the game. It was the senior’s eighth home run of the season, 50th of his career, and gave him his ninth career multi-homer game.

Clemson and Georgia Tech will conclude the three-game series Sunday at 2:00 PM at Doug Kingsmore Stadium.