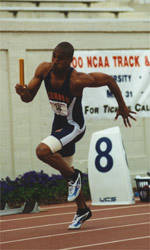 Crawford, Clemson’s most decorated men’s track and field athlete with 11 All-America honors and three National Championships, claimed bronze in the 200m dash. He recorded a time of 20.60 in the preliminaries to advance to the quarterfinals where he ran a time of 20.19. Crawford posted a time of 20.21 in the semifinals, and finished third in the finals with a time of 20.20. He won the indoor world championships in the 200m, and is the reigning 200m American title holder outdoor.

Modibo, a senior from Beltsville, MD, represented Trinidad and Tobago in the 400m dash. He recorded a time of 45.82 in the preliminaries, but did not advance to the quarterfinals.

Thomas, a freshman from Burtonsville, MD, competed in the 4x100m for Jamaica. The Jamaican team failed to advance beyond the preliminaries due to an exchange zone violation.