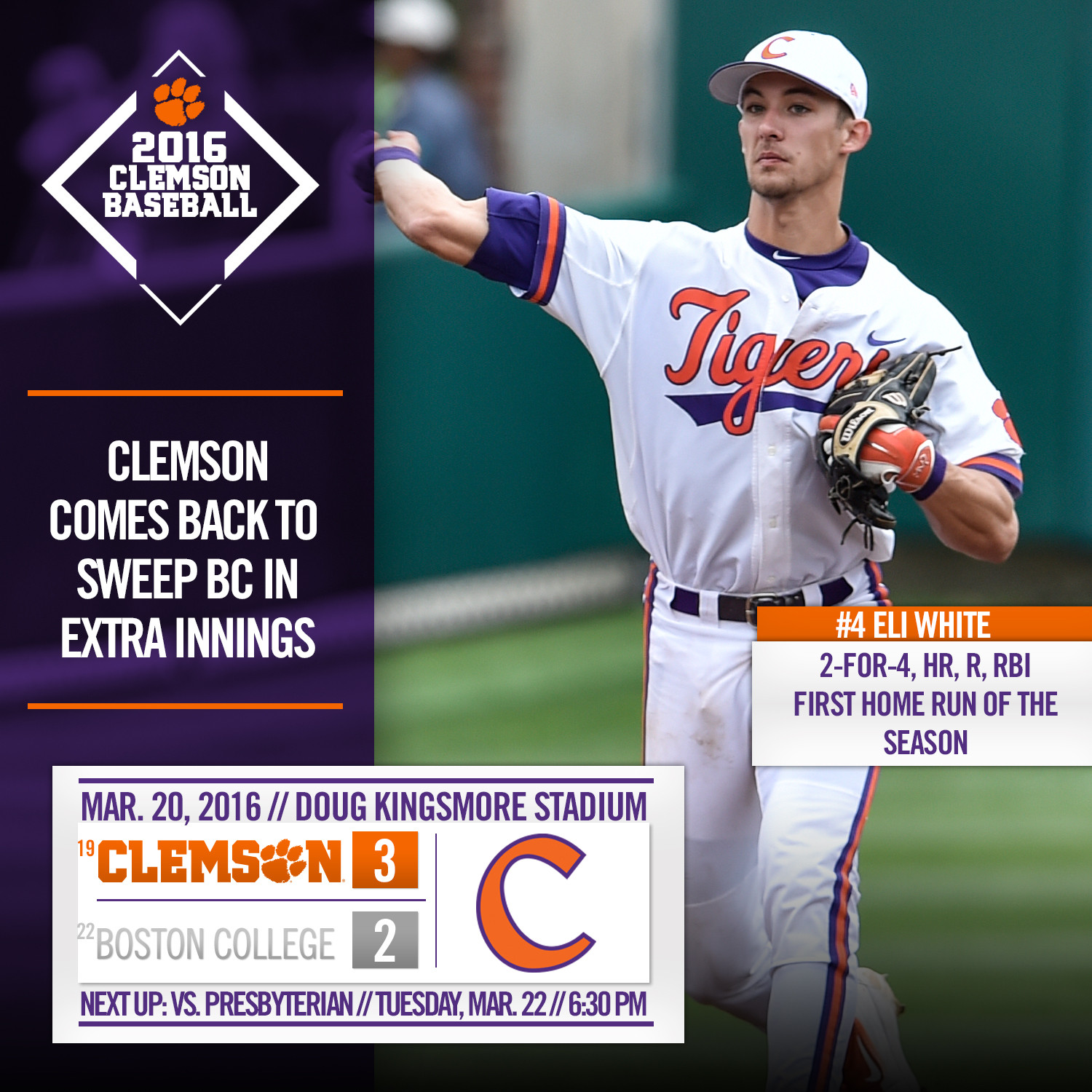 CLEMSON, S.C. – Seth Beer’s two-out, solo homer in the 10th inning lifted No. 19 Clemson to a 3-2 walkoff win over No. 22 Boston College at Doug Kingsmore Stadium on Sunday afternoon. The Tigers, who swept the series 3-0, improved to 16-3 overall and 5-1 in the ACC. It was also their seventh win in a row and 11th straight home victory in their first extra-inning game of 2016. The Eagles dropped to 12-6 overall and 2-4 in ACC play.

The Tigers trailed 2-0 before Eli White belted a solo homer, his first long ball of the year, in the seventh inning to cut Boston College’s lead in half. Chris Williams then came through with the game-tying, run-scoring single with one out in the ninth inning to bring home pinch-runner K.J. Bryant. Beer, who earlier extended his hitting streak to 17 games, belted a 1-0 breaking ball over the fence in right field for Clemson’s first walkoff homer since May 14, 2013 (Kevin Bradley vs. USC Upstate). It was also Beer’s ninth homer of the season and seventh straight two-hit game.

Alex Bostic (3-0) earned the win by tossing 1.2 scoreless innings of one-hit ball with three strikeouts. Tiger starter Alex Eubanks pitched 6.2 strong innings, allowing just two runs and no walks with a career-high 10 strikeouts. Bostic, Eubanks and Krall combined for 15 strikeouts against no walks. John Nicklas (3-1) suffered the loss, as he gave up Beer’s long ball. Eagle starter Jacob Stevens gave up only six hits, one run and no walks with three strikeouts. The earned run was his first allowed in 29.0 innings pitched in 2016.

Clemson hosts Presbyterian College on Tuesday at 6:30 p.m. Live video is available for free on TigerCast at ClemsonTigers.com. Fans can purchase four tickets and a $10 concession voucher for only $30. Fans can also buy one regular-price ticket and get one of equal value for free.