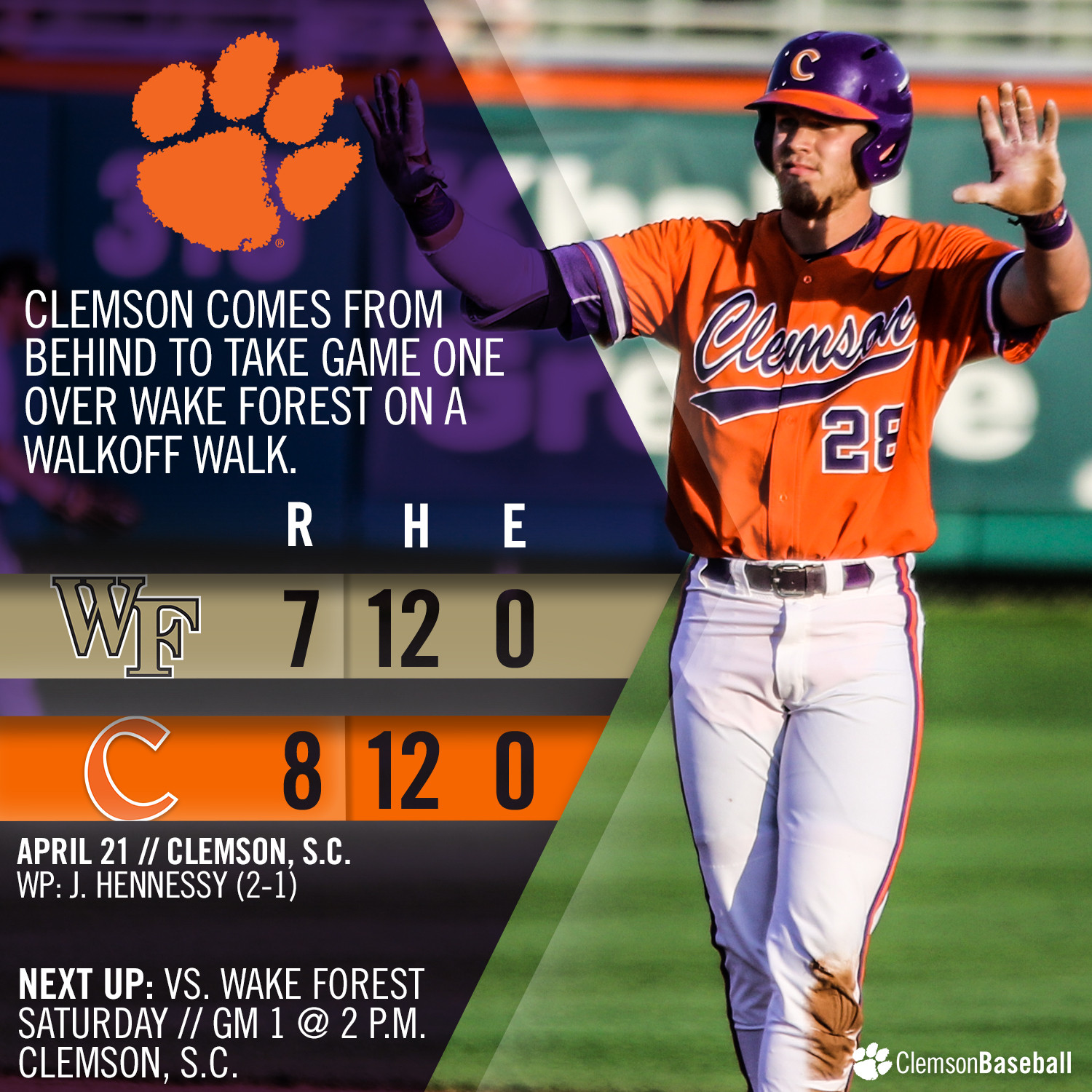 CU Rallies For 8-7 Win Over WF

CLEMSON, S.C. – Chris Williams’ bases-loaded walk with two outs plated Chase Pinder to compete a three-run ninth inning in No. 4 Clemson’s 8-7 walkoff win over No. 17 Wake Forest at Doug Kingsmore Stadium on Friday night. The Tigers, who took a 1-0 series lead and upped their home winning streak to 10 games, improved to 32-7 overall and 15-4 in the ACC. The Demon Deacons fell to 28-12 overall and 12-7 in ACC play.

Clemson scored four runs in the first inning, highlighted by Reed Rohlman’s single that extended his hitting streak to 16 games and Seth Beer’s two-run double. Wake Forest answered with three runs in the third inning, capped by Gavin Sheets’ two-run homer. With the score tied 5-5 in the eighth inning, Bruce Steel ripped a run-scoring single to put Wake Forest on top, then it added another run on a bases-loaded walk.

But the Tigers loaded the bases with one out in the ninth inning before Rohlman’s single scored Jordan Greene. Logan Davidson’s sacrifice fly brought home Weston Jackson to tie the score. After Beer walked, Williams walked on a 3-2 pitch to score Pinder.

Jacob Hennessy (2-1) pitched a scoreless ninth inning with a strikeout to earn the win. Griffin Roberts (1-2) suffered the loss, as he allowed three runs on two hits, three walks and a hit-by-pitch.

Due to forecasted inclement weather on Sunday, the series concludes Saturday with a doubleheader starting at 2 p.m., on ACC Network Extra. There will be 45 minutes in between games when the stadium is cleared. Tickets for Saturday’s originally-scheduled game will be honored for the first game of the doubleheader, while tickets for Sunday’s originally-scheduled game will be honored for the second game of the doubleheader.