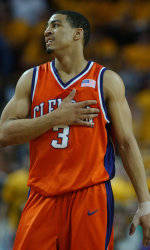 CSS to Broadcast Clemson-Louisville at 7:00 PM

Atlanta, Ga. – Comcast / Charter Sports Southeast (CSS) will carry its third National Invitational Tournament match-up in a week, as Louisville hosts Clemson in a second round contest on Monday at 7 p.m. ET / 6 p.m. CT. The Louisville Cardinals defeated Delaware State on Friday night to advance, while Clemson notched a win over Louisiana Tech on Wednesday.

“We pride ourselves on our college basketball coverage and are excited for the opportunity to carry three NIT match-ups this week,” said Mark Fuhrman, general manager of CSS. “This is a great game for our network because we have many Clemson and Louisville fans in our coverage area.”

CSS is a 24-hour regional sports network serving approximately 4.5 million cable subscribers across 11 southeastern states. Launched in 1999, the network is a partnership between Comcast Corporation and Charter Communications and provides a comprehensive mix of live sports programming, sports news and in-depth sports analysis exclusively geared toward fans in the Southeast. CSS is only available on cable.