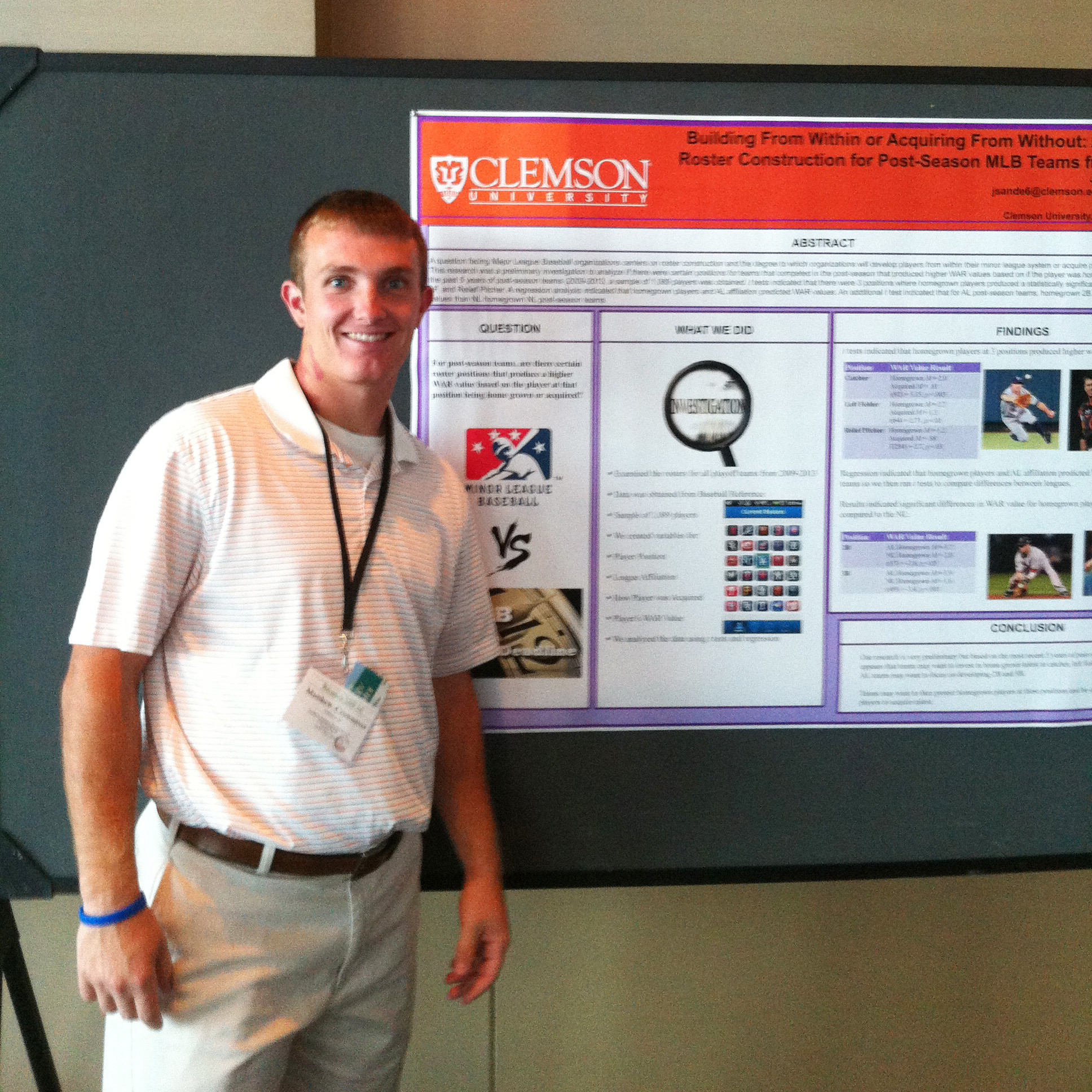 The Society for American Baseball Research (SABR) hosts an annual convention that features the newest statistical innovations from the brightest minds around the industry. One of those bright minds this year is Clemson Baseball junior lefty Matthew Crownover.

Crownover, along with his professor Dr. Jimmy Sanderson, was invited to the event in Houston, Texas to present original research on Major League Baseball roster construction and the best strategies to employ when building a team through the draft versus free agency.

To chronicle his experience at the SABR Convention, Crownover provided his thoughts and photos for ClemsonTigers.com.

August 1 might be thought of as the day after the trading deadline to most MLB fans, but to a select few in the analytics world, it played host to the National SABR conference in Houston, Texas.

This conference is thought of as one of the launching pads for some of baseball’s young and bright minds in the industry. Here, young men and women come to present their unique perspectives and twists on the game they love so dearly.

To get to Houston, Dr. Jimmy Sanderson and I drove to Atlanta then flew to the Houston airport. The only item we checked on the flight was our poster presentation featuring our research, which we would display at the conference. We waited patiently at baggage claim for the arrival of the poster, knowing good and well we would have ourselves in all kinds of a mess if our poster happened to “get lost” on the ride over! Luckily for us we were able to find it quite easily and off to the conference we went.

Once we battled stop-and-go traffic on the ride over to the hotel, we tried to check into the hotel but our rooms were not available. So we decided to get a bite to eat for lunch and walked over to the local Mexican cuisine at Canyon Café (known for being stingy on their queso dip…just kidding no hard feelings)!

We went back to the hotel after lunch and checked into the conference in the lobby area and received our bag of “goodies” for the SABR 44 conference. In that bag of goodies, we received a convention program, book on the history of baseball in Houston, SABR National Pastime special magazine on the Houston Astros history, Sugar Land Skeeters program, visitor guide magazine of Houston and tickets to the Astros game for Saturday night. We then checked into our room and started making plans for the rest of the day.

We decided to go ahead and set up our poster around 4 p.m. so we could walk around downstairs at the convention before we had to stand with our poster from 5:30-6:30 p.m. to present to convention attendees. On our way strolling around, we ran into a room that had baseball books everywhere being sold. We both felt like we were baseball heaven. It was like we were given baseball history in the palm of our hands. Dr. Sanderson could not resist and gave into the temptations and bought a book himself. I saw so many books I liked but couldn’t pull the trigger (didn’t want to impulse shop).

So 5:30 came and we were ready for the main event! We both didn’t know what to expect out of other poster presentations and the amount of people who would come by. We were blown away by the amount of people who came by and asked questions and gave suggestions to further extend our research in the project (which was…how are teams built – through acquisitions or drafting players).

We were first approached by a highly-respected writer and researcher in the baseball world, Richard Cramer. He is the creator of STATS, inc. and holds a bachelor’s degree from Harvard and Ph.D. from MIT. When he talked, we listened! And surprisingly, he offered very good advice to simplify what we were looking for and try to look for only infielders and outfielders individually instead of each position by itself.

We also met a group of longtime members, Richard Dempsey, Ted Detulio, Sheldon Miller and Ron Selter. These veteran members were very interested in our presentation and asked about it extensively. My favorite part of the night was after our presentation was over, the four men told stories and “what if” baseball situations  that no fan in their right mind would every think of!

For example, one question that was asked was how can three triples, three singles and one stolen base be made in one inning without a run scoring? And what is the maximum number of pitches a batter can face without counting foul balls (11)? We had a lot of fun with these veteran guys and made many memories and had a good few laughs along the way.

After a quick change of clothes, we were able to catch a cab and head to Minute Maid Park for the Astros vs. Blue Jays game. We were able to the park right at the tail end of the third inning. We had very good seats on the second-level balcony overlooking the field. The retractable roof was down for the game with the air conditioning going full blast.

The game was rather quiet until the bottom of the eighth when newcomer Gregorio Petit hit his first home run of the year. The Astros later tacked on another run after a Jose Altuve double to the left-center gap. Chad Qualls came in to shut the door on the Blue Jays for an Astros’ win on fireworks night at the ballpark.

As we took a taxi home, I soon realized the best lesson of the day from our Venezuelan countrymen taxi driver – baseball is an international language that everyone in the world can speak. No matter what country you come from, baseball connects us with the joy we all get from watching the game and our favorite players.

This game that I play, enjoy watching and hope to work in one day is the greatest game of all. It is a pure game that has stood the test of time and will always be a game that clings to traditions, but is first in innovative thinking and philosophies that will keep generations wanting to come back to the ballpark for years to come.

For more information on the project, click here – http://newsstand.clemson.edu/mediarelations/study-develop-or-acquire-players-for-a-winning-mlb-team/