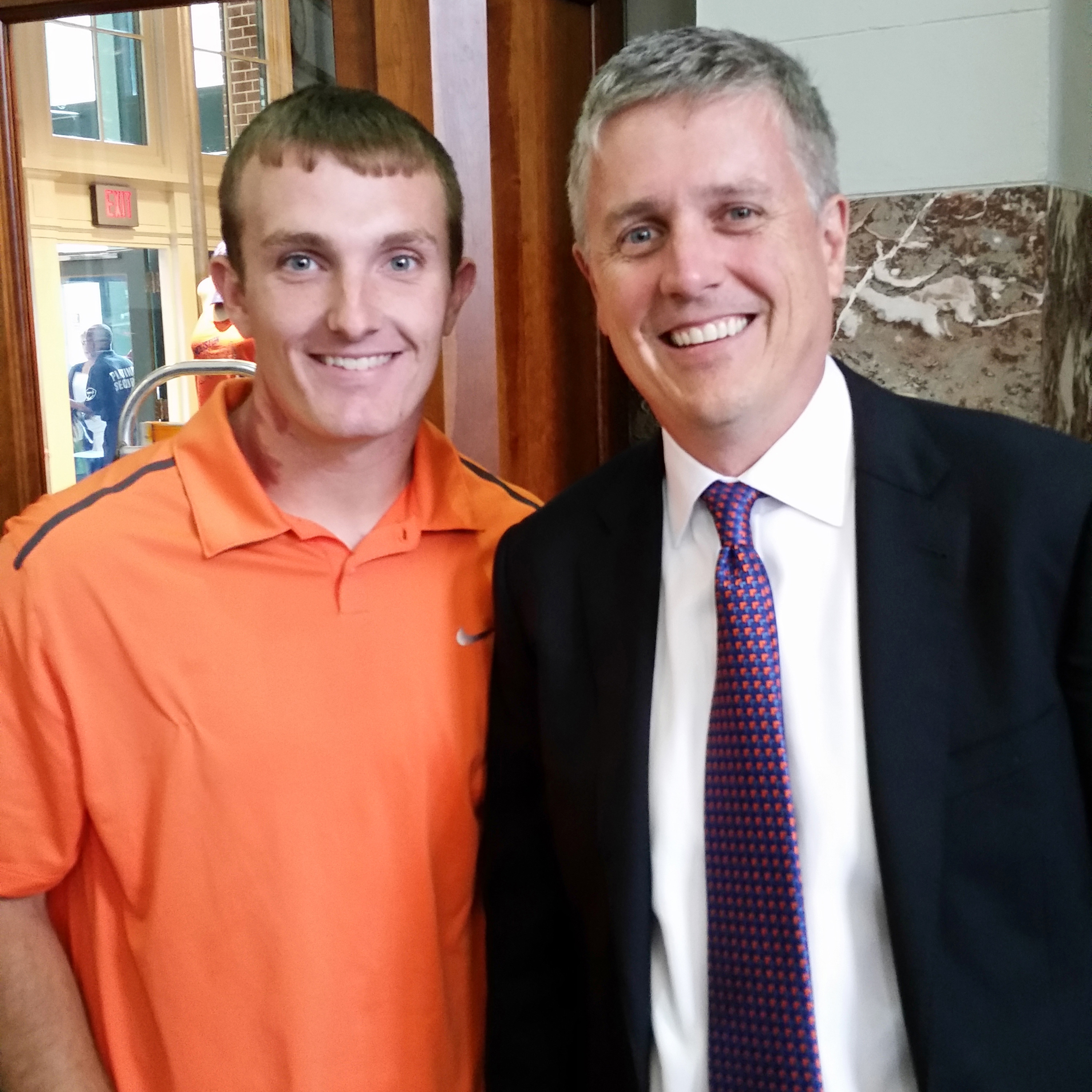 The Society for American Baseball Research (SABR) hosts an annual convention that features the newest statistical innovations from the brightest minds around the industry. One of those bright minds this year is Clemson Baseball junior lefty Matthew Crownover.

Crownover, along with his professor Dr. Jimmy Sanderson, was invited to the event in Houston, Texas to present original research on Major League Baseball roster construction and the best strategies to employ when building a team through the draft versus free agency.

To chronicle his experience at the SABR Convention, Crownover provided his thoughts and photos for ClemsonTigers.com.

Saturday started with my alarm clock pounding at 8:00 a.m. to get ready for a day full of SABR presentations. After Dr. Sanderson and I were up and moving, we walked a couple blocks down the street to a local bakery called Kenny & Ziggy’s. We were basically forced to eat there due to how much a bagel and bottle of water cost in the lobby ($5). After a big breakfast, we walked back to the hotel to get our day underway listening to presentations.

The first presentation of the day was at 9:15 a.m. about batter-pitcher confrontations. This presentation was very analytical and caused much confusion due to the fact he had formulas filling up two lines of space to figure out one value for a variable! This was way above my head but was interesting. The jest of the whole presentation was to calculate in what counts and what ratio of strikes a pitcher should throw in a given plate appearance.

He did, however, show that over numerous years of research that hitters in an 0-0 count are more anxious to swing at a ball in that count than any other one besides 3-2. He basically was trying to tweak the old baseball adage, “to throw first-pitch strikes.” He was saying that throwing first-pitch strikes are good, but in 0-0 counts you have a higher probability to get a batter to chase at a border-line pitch due to over-aggressiveness. He also showed how his theory lined up with Felix Hernandez’s perfect game of throwing strikes two-thirds of the time.

The second presentation was done by founder of SABR, Vince Gennaro, on an in-depth look at team chemistry. This was an unfamiliar study done by a “Number Wiz” that did not include much analytics but more qualitative research on personal feelings and experiences. He made the case that team chemistry is just as important, where individual hitter-pitcher confrontations occur, as a basketball team that needs cohesion to score in a system offense. He said this is true because the feeling of loneliness felt at the plate or on the mound by the pitcher makes each player yearn for positive and comforting vibes from teammates in order to succeed.

He defined team chemistry as the degree in which players are invested in their teammates and sacrificing themselves for the good of the game. He found that the manager and front office were the two catalysts that drove team chemistry levels. If they were in confrontations all the time, the team seemed to suffer because of it. He mentioned the World Series champion from last year (Boston Red Sox) and its new approach toward players relationship with their family at games.

The organization created a family room near the locker room, which allowed family members to be close by before and after games. This allowed them to be around the team more and enabled players to relax and not stress about their responsibilities as a husband/father. It rather helped them to free their mind and play care-free knowing that they could be with their family more efficiently this way.

He went on to talk about qualities of high-functioning teams – accountability, trust, positive conflict and proactively supporting team goals. Organizations that seem to understand these qualities are the St. Louis Cardinals and the Baltimore Orioles of the late 1970s, who both were critically acclaimed by the way they ran their organizations. Team chemistry still has not been quantified by data but does play a key role in team success.

The next section was player-to-front-office panels. The three men were: 1) Eddie Robinson, who was a 13-year major leaguer, farm director for Houston Astros, general manager of the Atlanta Braves for five years and Texas Rangers general manager. 2) Dr. Bobby Brown, who was a four-time World Series winner for the New York Yankees, elected into three college halls of fame (Stanford, Tulane Medical School, UCLA), served 25 years as a cardiologist, interim stint as president of the Texas Rangers and 10 years as American League President. 3) Bob Watson, who was a 19-year major leaguer, widely-known for scoring baseball’s 1,000,000th run, first player to hit for the cycle in both leagues, assistant and head general manager of the Houston Astros and general manager of the New York Yankees 1990’s dynasty.

All three men were great storytellers who told numerous Yogi Berra, Joe DiMaggio and Marilyn Monroe stories, but Watson hit home with me the most. He said Sandy Alderson was the man who helped him along his path to become an MLB general manager. He gave advice to seek out people in the front office during his playing days and alloweded him to know his interest in the business side of the game once done playing.

My favorite presentation was next that was titled, “Why does the home team score more runs in the first inning?” by David Smith. He had went back from 1909-13 to get his data! How ambitious! He explained and showed statistically how proven through solid analytics that home teams scored more in the bottom half of the first inning than the visiting team. He claims, and I agree, it was not so much how well the hitters did in those innings, but rather how the pitcher performed. He hypothesized that due to the fact that the home pitcher knows exactly what time he will throw the first pitch of the game, he can get his routine down to a science and have the advantage of being used to his home mound as opposed to a visiting pitcher, who really has no idea how long the top of the first will last, which throws him off his rhythm.

You might be thinking this is just coincidence. But here are some solid facts about two well-known hall of famers. Nolan Ryan’s career ERA in visiting first innings was 5.38, while in home first innings it was 3.84. The same split for Sandy Koufax – visting 4.78 and home 1.82. What a difference it does make after all! I can relate to this because I am a very regimented person who likes to stay in a routine. This study really made sense to me and I can see why home pitchers really do have the advantage.

We finally went to the ballpark around 1:30 p.m., as we listened to a panel of former Astros’ players, Allan Ashby, Larry Dierker and Art Howe. Yes, I said Art Howe, who was unfortunately misplayed in the movie Moneyball with Brad Pitt. These former players talked about the Astros’ early years of struggles as the Colt .45s and the rise to prominence in the 1980s and 1990s. They offered many great stories and recollections of their years with the organization. I could have listened to them for days.

Next up was Astros General Manager Jeff Luhnow and his assistants in the front office. They talked for an hour about how a front office was constructed and who made what decisions in each department. His two assistants talked more about the analytical side of the front office as far as the new trends in scouting and the massive shifts played in the infields. He also spoke about the player value system and how its used in evaluating prospects in upcoming drafts.

After the session, I stuck around and had a two-minute conversation with Luhnow and told him who I was and where I was from and what I wanted to do when my playing days are over. He offered some great advice…to make sure I played as long as I could and to let the front office I play for know what I wanted to do when baseball is over, and they should be more than willing to help prepare you and give you opportunities to fulfill those dreams. He was very nice. After that, we grabbed our Andy Pettitte commemorative jerseys (one of my favorite pitchers of my childhood besides Tom Glavine, of course) and went into the park.

At the park, we had outfield seats, but moved to different seats throughout the park. I spotted some seats right behind the Astros’ dugout, where we moved to again successfully and were able to see former Clemson lefthander Tony Sipp, who pitched to one batter in the eighth inning with two outs. The Astros closed it out and finished off their second win in a row over the Blue Jays.

We then took the bus back to the hotel and went to dinner at the Lux Café, three or four blocks away from the hotel. The food was great and we enjoyed the company with Dr. Sanderson.

We will be flying home on Sunday afternoon. We have enjoyed our short stay here at the SABR Convention in Houston. We came here not knowing what to expect or even if we belonged here.

After the first night, we soon found out that our research was a very innovative and interesting topic to the elite sabermetric minds of baseball. We soon realized that we both belonged here and found it comforting to know that we had done something that others had never thought of before. We learned a great deal and formed new ideas for future projects and hope to add to our portfolio in the coming semesters. It means a great deal to me to have others interested in my work outside of the baseball field.

I hope we have made the Clemson Family proud by our work and actions over the past week, because we surely feel proud to represent Clemson everywhere we go.

For more information on the project, click here – http://newsstand.clemson.edu/mediarelations/study-develop-or-acquire-players-for-a-winning-mlb-team/