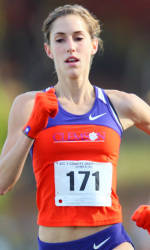 CLEMSON, SC – The Tiger cross country program will host a number of schools from the Atlantic Coast Conference and locally on Friday at the Clemson Invitational. The meet will be held at Musser Farms, Clemson’s home course. The meet begins with the women’s 6K race at 6:15 PM, followed by the men’s 8K at 6:45.

The Tiger women are ranked sixth in the latest USTFCCCA Southeast Region poll, and return a number of veterans. Alyssa Kulik and Kim Ruck, both all-region performers a year ago, make their 2011 debuts this weekend for Clemson. Ruck competed at the 2010 NCAA Cross Country Championships as well. They will also be joined by newcomer Kate Borowicz, who will be in a Clemson uniform for the first time after sitting out the 2010 season after transferring from Georgia Tech.

At Clemson’s first meet, the Eye Opener in Spartanburg, the women finished runner-up with a partial squad. Natalie Anthony, a sophomore from Randolph, NJ, was the team’s top runner with a 5K time of 18:10. Elyse Borisko, Cara Talty, Walker Marion and Alyssa Henshaw finished 11th through 14th, respectively.

The men’s team is coming off a tie for first place at the Eye Opener two weeks ago. In that race, sophomore Ty McCormack was the individual runner-up after turning in an 8K time of 25:44. Aaron Ramirez (6th) and Scott Stanley (8th) also posted top-10 finishes for the Tigers.