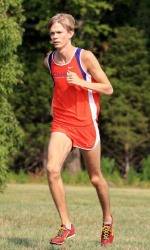 Clemson, SC – The men’s and women’s cross country teams return to action on Saturday to compete in the 25th annual Eye Opener, an event hosted by USC Upstate in Spartanburg, SC. The women’s 5K race will begin at 8:00 AM, while the men’s 8K competition is slated for 8:30 at Milliken Center.

Clemson got its 2008 season underway last weekend with a pair of fourth-place finishes at the Covered Bridge Open in Boone, NC. The Tigers will be traveling several more student-athletes this week, including sophomore standout Jenna Baker on the women’s side. Baker was the team’s top finisher in four of the last five meets of the 2007 season. She was the fourth-best freshman runner at the ACC Championships last fall, and she looks to continue to build on her strong performances from a year ago.

In last week’s strategic race, six women’s runners from Clemson finished in the top 35. Sunday Ford, Lauren Klas, Candice Johnson, Joanie Castagno, and Lisa Brown finished in positions 26-30. Klas made a successful return from an injury-plagued 2007-08 season. Abby Iselborn, a sophomore, was the 35th-place finisher and just outside of scoring position for Clemson.

On the men’s side, graduate captain Sam Bryfczynski will see his first action of the 2008 season. Bryfczynski was the team’s most improved runner in 2007 and looks to lead this year’s young squad as the season progresses. Bryce Iverson, who is nursing an injury, will not compete this weekend. Will Noble, who finished 22nd last weekend, will also sit out Saturday’s race. Chris Slate, a sophomore from Delaware, was Clemson’s highest finisher last weekend with an 18th-place effort.