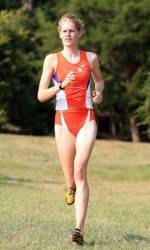 Newark, DE – The Clemson cross country teams had an outstanding Saturday afternoon, with both teams producing team and individual champions at the Delaware Invitational. Sam Bryfczynski won the men’s individual title to lead the Tigers to victory over host Delaware, while Jenna Baker won her first cross country event to propel the Clemson women ahead of the Blue Hens as well.

Bryfczynski, a former winner at the Clemson Invitational as a sophomore, put together a time of 25:46 at the finish line over an 8000m distance. He is the first individual champion for the men’s team this season. The Tigers tallied 19 points and cruised past Delaware, who totaled 47. Navy, a historically strong cross country program, had 65 total points Saturday.

The Marietta, GA native inched ahead of fellow captain Will Noble at the finish line. Noble was credited with the same time but finished runner-up. Clemson’s third scorer on the men’s side was steadily improving sophomore Chris Slate, who ran 25:56 and came home with a third-place overall finish. Chad Holt (7th) and Tyler Morey (8th) were the Tigers’ final scorers, posting times of 26:12 and 26:15 respectively.

On the women’s side, Baker improved on her career-best finish by taking home top honors. The product of Bellevue, OH posted a season-best time of 18:27 over the rolling 5000m course. Clemson won with a total of 27 points, while

Delaware native Joanie Castagno was runner-up in front of her home crowd. She crossed the finish line with a time of 18:28, easily a personal best for the sophomore. Stephanie Buffo was seventh individually after recording a time of 18:50. She finished one spot and one second ahead of yet another member of Clemson’s sophomore class, Abby Iselborn. The fifth and final scorer for the women’s team on Saturday was senior captain Sunday Ford, who was ninth overall at 18:53.

The teams return to action on October 4 after a week off to prepare for the Auburn Invitational in Alabama.