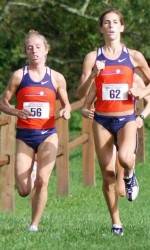 CLEMSON, SC – The men’s and women’s cross country teams both moved into the latest regional rankings compiled by the U.S. Track & Field and Cross Country Coaches’ Association (USTFCCCA), the organization announced Monday. The women’s team is listed No. 12, while the men are ranked No. 15 within the Southeast Region.

Both teams are coming off runner-up finishes at the Charlotte Invitational. The women’s team placed second behind current No. 11 team in the region, Charlotte. The margin of victory was only eight points for the hometown 49ers. Clemson produced the individual champion in Kelsey Armstrong, both of whom are sophomores. The Tigers also knocked off two of last week’s ranked regional teams in South Carolina and USC Upstate.

The men also finished second behind Charlotte, currently the No. 12 ranked school in the Southeast Region. The men’s team was paced by a quartet of juniors: Jonathan Sunde (12th place), Chad Holt (16th), Chris Slate (19th) and Tyler Morey (21st).

Both teams will return to action on Friday, Oct. 16 for the Blue Ridge Open in Boone, NC.