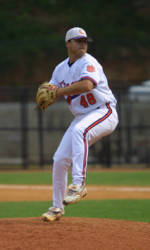 Fronk led the Tar Heels to a 4-1 week including a series win over No. 14 Miami in Coral Gables. The sophomore third baseman hit .579 on the week going 11-for-19 at the plate with 10 runs scored and nine RBIs. Fronk tallied 26 total bases en route to slugging 1.368 behind four doubles, a triple and three home runs. He also notched a .625 on-base percentage on the strength of 11 hits, three walks and one hit by pitch. In the three-game set at Miami, Fronk went 6-for-10 with six runs scored, four RBIs, two home runs, a double and a triple. He led North Carolina to a 9-6 win in the rubber game of the series with a two-run homer in the fourth and a solo shot in the eighth to go along with four RBIs. The Charlotte, N.C. native matched a career-high with three hits, including a home run, in the Tar Heels’ 23-7 win over Davidson on Wednesday. Fronk is currently riding a career-best, 11-game hitting streak.

Cribb pitched a complete game, six-hitter to pick-up the win in Clemson’s 3-1 victory over Maryland on Friday. The senior right hander allowed six hits, all singles, on one run and no walks while striking out nine. The lone Terrapin run was scored with two outs in the ninth inning. It was Cribb’s fourth complete game of his career. On the season, the Lake View, S.C., native improved his record to 6-0 with a 1.98 ERA in seven starts and one relief appearance. Cribb is holding opponents to a .196 batting average, while posting 40 strike outs in 41.0 innings of work.