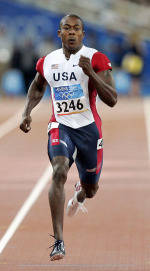 BERLIN – Former Clemson track great Shawn Crawford has qualified for the finals in the 200m dash at the IAAF World Championships. Crawford, former Olympic gold medalist who won three individual NCAA championships in the event at Clemson, will compete in Thursday’s final at 8:35 p.m. in Berlin.

Crawford posted a semifinal time of 20.35, running in the same heat as world record-holder and 2008 Olympic gold medalist Usain Bolt. Crawford captured the gold medal in the 200m dash at the 2004 Olympic Games in Athens, Greece. Thus, Thursday’s final will pit the two most recent Olympic gold medalists against one another.

Crawford is a former world champion in the event, though he is seeking his first outdoor championship. He won the indoor world championship in 2001, just one year removed from his decorated career with the Tiger track program. Crawford holds the school record with 11 All-America certificates earned over the course of his career (1997-2000).

Crawford is also a candidate for Team USA’s 4x100m relay pool, along with former Clemson sprint star Travis Padgett (2005-08). Padgett competed in the event with Team USA at the 2008 Olympics in Beijing. The prelims for the 4×1 are scheduled for Friday.