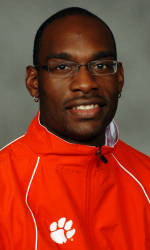 Clemson, SC – Senior sprinter Cowin Mills will be competing for his home country of Trinidad this weekend at the 2008 CAC Games (Central America and Caribbean) in Cali, Colombia. Mills made the roster by virtue of top-four finishes in two events late last month at Trinidad’s national championships.

Mills placed third in the 200m dash after running an outstanding personal best 20.84 at the championships, which were held in Port of Spain, Trinidad. Less than an hour later, he nearly ran a personal best by turning out a 46.95 in the 400m dash to finish fourth in that event.

Mills, who was born in Trinidad and lived in the country until he was nine years old, earned three letters in track & field at Clemson. He was a member of Clemson’s All-America 4x100m relay team in 2007, and was also a member of the ACC championship 4x400m relay in 2007 and 4x100m relay this past season.