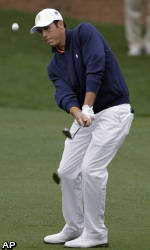 FORT WORTH, TX -­ Baird Private Wealth Management, in association with Colonial Country Club, The Friends of Golf (FOG) and the Golf Coaches Association of America, has announced the 10 semifinalists for the 2012 The Ben Hogan Award.

The list will be pared down to three finalists on Thursday, May 10. The three finalists will then attend a black-tie banquet at Colonial Country Club on Monday, May 21, where the winner will be crowned prior to the start of the PGA TOUR’s Crowne Plaza Invitational.

The award, which was first issued in 1990 and also included academic achievement in its original list of standards, revised its criteria for the 2001-02 collegiate season to its current standard of honoring the outstanding amateur collegiate golfer.

About the Semifinalists * The Ben Hogan Award semifinalist group includes one senior, three juniors, one sophomore and a record five freshmen. * Three of the nominees have previously been named semifinalists (Blayne Barber-2011, Patrick Cantlay-2011, Dylan Frittelli-2010), with Cantlay ultimately being named a finalist last year. * In the college rankings, the list includes the top five and seven of the top 10 players in the latest Golfweek/Sagarin individual rankings as well as the top five and seven of the top nine in the Golfstat rankings. * Among the amateur rankings, the semifinalists feature five of the top six and nine of the top 20 players in the R&A World Amateur rankings as well as five of the top six and eight of the top 20 in the Scratch Players World Amateur listing. * Just eight universities are represented, as two schools (Texas and Washington) boast two nominees each. The two are the ninth and 10th schools since 2002 with at least two golfers among the final 10. * With four, the Pac-12 Conference features the most semifinalists (Washington’s Cheng-Tsung Pan and Chris Williams, UCLA’s Patrick Cantlay and Stanford’s Patrick Rodgers). The other leagues with multiple student-athletes on the list are the Southeastern Conference (2) and Big 12 Conference (2). * The 10 players hail from seven different states (California, Florida, Idaho, Indiana, Kentucky, South Carolina and Texas) and three foreign countries (France, South Africa and Taiwan). * The 10 semifinalists are comprised of schools in just five states: Alabama (2), California (2), South Carolina (1), Texas (3) and Washington (2). * Alabama now has had a semifinalist in five consecutive years (Michael Thompson-2008, Bud Cauley-2009, 2010, 2011 and Justin Thomas-2012), which is the longest active streak in the country. * Other schools with representatives at least two years in a row are: Stanford (3), Auburn (2) and UCLA (2).