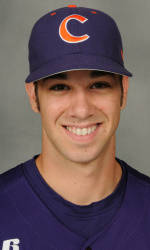 Sophomore lefthander Tim Cooney pitched a complete game and Wake Forest totaled 12 hits in its 9-3 win over Clemson in front of 5,280 fans at Doug Kingsmore Stadium on Saturday night. The Demon Deacons, who evened the series 1-1, improved to 16-24 overall and 7-13 in the ACC. The Tigers, who saw their six-game winning streak come to an end, fell to 24-14 overall and 10-10 in ACC play.

The Demon Deacons broke a 1-1 tie with three two-out runs in the third inning and never trailed again. Wake Forest added runs in the fifth, sixth, seventh, and eighth innings to put the game away. The Demon Deacons scored in six of the nine innings thanks in large part to putting their leadoff batter on base seven times in the contest.

Scott Firth (3-1), the first of five Clemson hurlers, suffered the loss. He gave up two hits, three runs, and four walks with one strikeout in 2.0 innings pitched. Freshman righthander Matt Campbell pitched 2.1 hitless innings with a career-high four strikeouts and did not allow an earned run in his longest career outing.

The Demon Deacons took the game’s first lead in the top of the first inning. Conor Keniry drew a one-out walk, stole second, and scored on Steven Brooks’ single to left-center.

In the bottom of the first inning, John Hinson led off with a double to right-center on the first pitch. Two batters later, Brad Miller flared a single to center to score Hinson.

In the third inning, Pat Blair led off with a hit-by-pitch, then Keniry walked after fouling off the first two pitches on failed bunt attempts. Brooks’ groundout to first moved the runners up a base, then Matt Conway struck out for out #2. But Mac Williamson came through with a single through the left side to plate Blair and Keniry as Williamson moved to second on a fielding error by Jeff Schaus. Charlie Morgan then lined a single to right-center to score Williamson and give Wake Forest a 4-1 lead.

The Tigers cut into the Demon Deacon lead in the fourth inning. Phil Pohl led off with a single to center, but he was erased on Miller’s fielder’s choice. Two batters later, Schaus laced a two-out double off the wall in right field to score Miller.

In the fifth inning, Conway led off with a shallow flyball that fell for a double down the right-field line. Williamson laid down a sacrifice bunt that hit his bat, went straight downward, bounced off the ground and hit his bat again, and rolled forward towards the left side of the infield. He reached and advanced to second base when Pohl’s throw to first base was errant, also allowing Conway to score from second base. Morgan’s groundout to second advanced Williamson to third, then Williamson scored on Carlos Lopez’s sacrifice fly to right-center.

Wake Forest added to its lead in the sixth inning. Brett Armour led off with an infield single and scored on Blair’s double to left-center.

In the seventh inning, Lopez hit a two-out single to right-center and pinch-hitter Stephen Schoettmer followed with a single up the middle. Armour then belted a single to left field to score Lopez.

In the eighth inning, Keniry led off with a walk. Brooks struck out swinging as Keniry was attempting to steal second. Pohl’s throw sailed into centerfield, then the home-plate umpire called interference and sent Keniry back to first base. Conway followed with a walk, then Williamson reached on a catcher’s interference. Morgan’s fielder’s choice then plated Keniry.

In the ninth inning, Shaffer reached when Zane Yanzick dropped his flyball to lead off the inning. Two batters later, Will Lamb reached on an infield single to extend his hitting streak to 13 games, then pinch-hitter Jon McGibbon lined a 1-2 pitch to center for a single to score Shaffer. But the next two Tigers were retired to give Wake Forest a six-run victory.

Lopez and Armour both totaled three hits to pace the Demon Deacons, who accumulated 12 hits in the game. Keniry added a game-high three runs, three walks, and two of the team’s five stolen bases.

Clemson and Wake Forest will play the finale of the three-game series on Sunday at 1:00 PM.