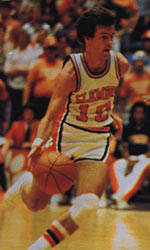 Former Clemson basketball standout Bob Conrad has been nominated to a federal judgeship in North Carolina by President George Bush. The announcement was made on Monday.

Conrad, a native of Illinois who is now a resident of Charlotte, has been the U.S. Attorney for the Western District of North Carolina since 2001. He has been a federal prosecutor since 1989. He gained national attention in 2000 when he was named the Chief of the United States Department of Justice Campaign Task Force by then Attorney General Janet Reno.

“I’m honored to be nominated by President Bush,” said Conrad. “If confirmed I would strive to pursue justice with integrity.”

In the classroom, Conrad won an NCAA Postgraduate scholarship and was the winner of the ACC’s Jim Weaver Award, an honor presented to the top all-around student-athlete in the ACC, regardless of sport. He also won the Norris Medal at Clemson in 1980, an honor presented to the University’s most outstanding student. After graduation from Clemson he went on to earn his law degree from the University of Virginia.