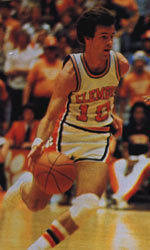 Former starting point guard and Clemson athletic Hall of Fame inductee Bob Conrad was confirmed a Federal Judge for the state of North Carolina by the United States Senate on Thursday. The confirmation came two years to the day after President George Bush first nominated Conrad for the position.

Conrad, 46 and a 1980 Clemson graduate, said, “I am grateful to President Bush and the U.S. Senate for the opportunity given to me today. It is a great honor and a solemn responsibility. I will do my best to fulfill the trust placed in me.”

Conrad was one of two North Carolinians confirmed for the federal judgeship on Thursday. James Dever of Raleigh was also confirmed on Thursday.

Conrad, a native of Illinois who is now a resident of Charlotte, was the U.S. Attorney for the Western District of North Carolina between 2001 and 2003. He had been a federal prosecutor since 1989. He gained national attention in 2000 when he was named the Chief of the United States Department of Justice Campaign Task Force by then Attorney General Janet Reno.

Conrad, 44, played for the Tigers basketball team under Bill Foster from 1976-80. He was a starter in 1978-79 and 1979-80. The 1979-80 team reached the Final Eight of the NCAA Tournament, the only Clemson men’s team in history to reach the regional finals. He is still fifth in school history in assists with 402 and seventh in steals with 141. He took 32 charges in 1978-79, still a Clemson single season record. He played in 79 Clemson victories in his career, second on the all-time list behind Elden Campbell.

In the classroom, Conrad won an NCAA Postgraduate scholarship and was the winner of the ACC’s Jim Weaver Award, an honor presented to the top all-around student-athlete in the ACC, regardless of sport. He also won the Norris Medal at Clemson in 1980, an honor presented to the University’s most outstanding student. After graduation from Clemson he went on to earn his law degree from the University of Virginia.