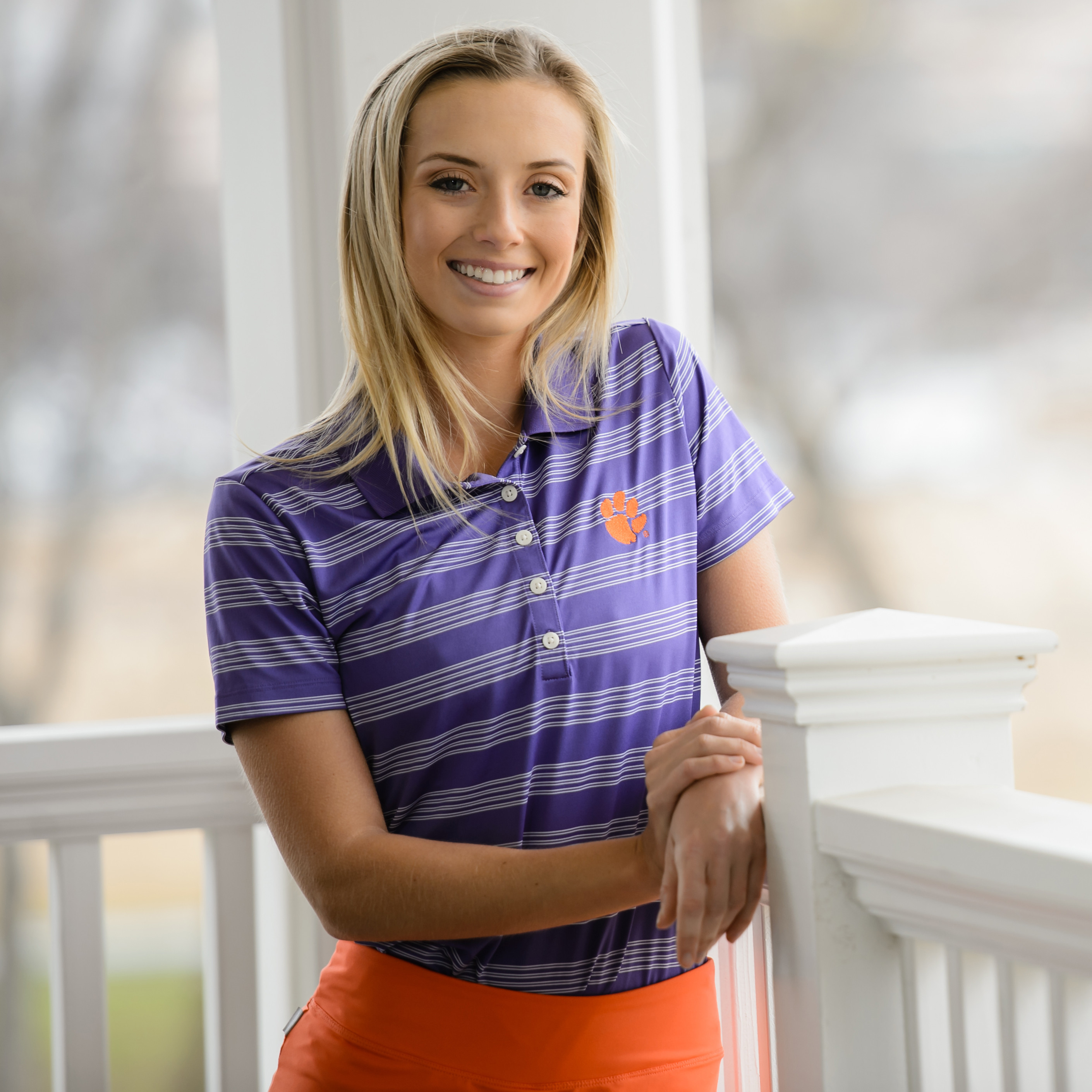 Deciding where to go to college is usually a tough decision. Deciding where to continue your athletic career is never easy, either. But for Lauren Salazar, it wasn’t as hard as she thought it would be.

The junior from Santa Clara, Calif., had many scholarship offers and a lot to consider when making her college decision. Salazar refers to her recruiting process as “unconventional.”

“I originally wanted to stay on the west coast, but after visiting all my schools of interest, I hadn’t fallen in love,” Salazar said. “My parents and I decided to go back to the drawing board. At that point, my mother had recently read an article in Golfweek magazine about the upcoming women’s golf team at Clemson University and it piqued my interest. I recognized it was a unique and rare chance for me to be a part of something special.”

Salazar decided to give newly appointed Head Coach John Thomas Horton a call to convey her interest in the program.

“I called Coach Horton, who was very surprised I wasn’t already committed. We then set up an unofficial visit and I attended the Clemson vs. Auburn football game (2011). It only took one visit for me. From that moment on, I knew Clemson was a special place and it was where I wanted to be.”

For Salazar, there was definitely something in the hills of the South Carolina upstate and she knew she had made her decision, one that would mean moving across from the country from her family and the only coast she had ever known.

“I told Coach Horton that while the other schools I was considering already had established successful programs, I didn’t want to win just another national championship. I wanted to help a team win its first ever national championship, because everyone always remembers the first, and Clemson presented that opportunity. Coach Horton then gave me the offer of a lifetime and asked me to join the Clemson Family. I was the first person to ever sign to the women’s golf program, and that is something you can’t put a price on.”

It’s easy to wonder how an 18-year-old can feel so confident making the decision to pick up and move across the country. For Salazar, she saw it as an opportunity to take a risk and reap the benefits.

“I’ve always been a risk taker, so the decision to come to Clemson was not a surprise to anyone that knew me. I’ve also been very independent my entire life, so the idea of going across the country didn’t scare me.”

“I would not have taken the risk if I did not see a large potential for success,” she said. “I recognized that Clemson was a university with a reputation and history of having very successful athletic programs. Coach Horton had already built a successful program from the ground up previously (at Tulane), so I knew we would be in good hands. When the opportunity of a lifetime presents itself, you do anything in your power to make it happen. Even though it meant redshirting my first year, it was a sacrifice I was willing to make.”

When asked what won her over to Clemson, she quickly referenced the family atmosphere and orange … lots of orange.

“When I attended my first football game, I had never seen so much orange in my entire life. When you’re in Clemson you really do feel a sense of family and unity unlike anywhere else I’ve ever been.”

After sitting out her freshman year, the redshirt sophomore has already made her mark on the program, competing in every tournament in her young career.

As comfortable as she is on the golf course, she’s equally as comfortable in her decision to become a Clemson Tiger.

“You know, I get asked a lot if I’m happy with the decision I made to come to Clemson and my answer is always ‘Absolutely, there is no place I would rather be.’ My experience at Clemson has fostered me into becoming a smart, enjoyable, ambitious young woman.”

“I think what has really made my experience so great is the support I’ve received from Clemson alumni and Clemson fans,” she said. “It is humbling to know that so many people care about the women’s golf team.”

Salazar knows that Clemson has just what she needs to succeed, and she is excited to see what the rest of her career holds.

“We are extremely grateful to have the world-class facilities that we have, and I really feel that my experience would not be the same if those facilities were not present. They have enabled me to succeed both on the golf course as well as in the classroom. As I mentioned earlier, the sense of family is very much visible when you first step foot on campus. However, what you see at first glance is just a snapshot of what you become a part of, once you actually get to Clemson.”