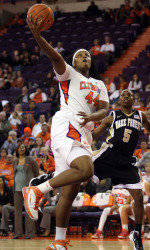 CLEMSON, S.C. – Clemson cut a 14-point second-half deficit to four, but fell just short in its comeback bid, dropping a 63-51 decision to Wake Forest (16-11, 6-8 ACC) on Sunday afternoon in Littlejohn Coliseum. The Lady Tigers (6-19, 2-12 ACC) had fewer turnovers, more points in the paint, and a 17-8 advantage in points off turnovers, but fell for the third straight time to fall to 48-17 all-time against the Demon Deacons.

Wake Forest went on a 16-4 run over the course of six minutes to respond to Clemson’s frantic push to bring the game to within four at 45-41 with 10:07 to play. The Demon Deacons hit 4-5 from behind the arc during the stretch, which included makes from three different players.

The Demon Deacons hit 10-21 (.476) from behind the arc, while hitting just 13-43 (.302) from two-point territory against Clemson’s zone defense, which had been stingy on the season in three-point defense. Coming in to Sunday, Clemson was allowing just .284 on the season and .278 in ACC play form behind the arc, both marks among the top five in the conference, while Wake Forest ranked ninth in the ACC at .281 in shooting the three on the season. However, in two games against the Lady Tigers this season, the Deacs have hit 19-44 (.432) and .262 against everyone else.

Clemson had just 16 turnovers against the ACC’s third-best team at forcing turnovers, but the Deacs controlled the boards, leading to a 52-40 rebounding advantage, and 20 second chance points. The Lady Tigers scored 13 of their 20 field goals in the paint, but struggled to a 2-11 mark behind the arc, with both makes belonging to freshman Kelly Gramlich, who was 2-2, and leads Clemson with 32 made three-point goals on the season.

Quinyotta Pettaway had 10 points and 11 rebounds to lead Clemson, with all of her points coming in the second half, after playing just six minutes in the first half due to foul trouble. It is her fourth double-double of the season, and sixth time this season in double-figures on the glass. Nikki Dixon, who entered averaging 16.8 points per game over the previous six games, was held to just eight points on 2-11 shooting, but did record a team-season-high seven steals in 33 minutes.

Senior Lindsey Mason had six points, six rebounds, and five blocks, giving her 67 total on the season, the sixth-highest total in school history in a single season. Fellow senior Shaniqua Pauldoprovided a spark off the bench, tallying nine points and five rebounds in 15 productive minutes.

The two teams traded baskets in the early parts of the game, with the score knotted at 20-20 after a pair of free throws from Pauldo with 4:50 to play in the first half. However, Clemson was cold from the floor, without scoring a field goal from the 9:26 mark of the first half until the 17:50 mark of the second half, a span of 11:36 of game clock, before a turnaround from Pettaway.

The Demon Deacons stretched the lead out to 14 at the 15:50 mark. Clemson cut it within ten as Pauldo scored a basket and was fouled to cut the score to 41-32. A jumper from Pettaway and a three in transition from Gramlich had Clemson within six with 11:38 to play, and eventually to within four at 45-41 on a Dunn layup with 10:07 to play.

Wake responded with a tightly-defensed three from Millesa Calicott, which started their 16-4 run to take control of the game.

Clemson will return to action to close out their home season on Thursday at 7:00 pm as they hold Senior Day to honor Lauren Couch. The game will be televised by CSS.